Hey, you remember Jaime Pinto, the toerag hired by Team Hodges to ruin Minera IRL and asset strip it to Polon’s pally pals? Well since he was…

…kicked out of Minera IRL by its shareholders
…fired from Peru O&G company Relapasa for helping to run it into the ground
…kicked out of a local pension fund for recommending Relapasa as a good investment
…and even being kicked off the board of a company as doggy as Lupaka Gold (LPK.v)

…he’s been at a loose end, without much to do and a lot of day to fill. Now obviously he can’t schlep around his fave coffee houses trying to drum up business all day so this afternoon he decided to do something he never bothered to do in the whole of 2015, he learned a bit about Minera IRL’s Ollachea project. He went along and decided to take a front row seat at the presentation of the project at a Peru geology conference, the talk given by the man who stood up to him at IRL and exposed his nefarious ways, Diego Benavides. Here’s the montage photo of Benavides at the podium and below, there’s our unemployed pal Jaime Pinto: 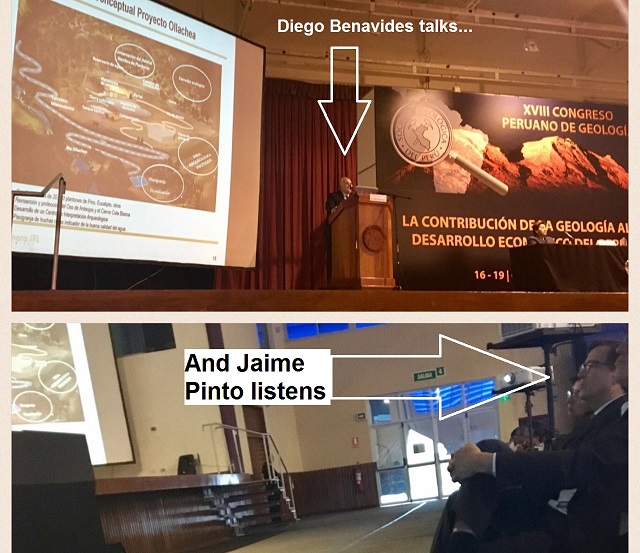 Doesn’t he look attentive? I wonder what he’s thinking? Something like “Hey if I hadn’t been a dishonest bastard with everybody and tried to steal the company away from its shareholders, that could have been me up there”, perhaps? Could be…