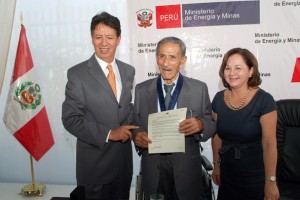 A leading figure in the Peru mining world passed on yesterday. Jesús Arias Dávila, chairman of the Poderosa gold mining company and a stalwart of the local scene, was greatly admired by all his peers. The photo above shows him at a ceremony in April this year, collecting a medal for his 67 years of service to the Peru mining industry. As the person who alerted your author to this sad news wrote (reproduced here because it’s better than anything I could write and as the writer knew him well):

As Peruvian mining magnates go, he was in a class of his own. In the years of Sendero, he was probably the only one who was prepared to show his face at the mines where the moolah came from. He had balls, and put a lot more back into the region he operated in than was necessary. And long before it was de rigueur for mining companies to extol their “social commitment” policies by adding the odd class room, or funding an organic vegetable patch to keep the natives from revolting.