On Monday January 27th 2014, at 11am Chile time and 9am Peru time, The Hague’s International Court of Justice with those world judges and assorted important people wearing silly clothes will deliver the long-awaited judgement on the maritime border dispute between Chile and Peru (the need to know: Chile says the line should be drawn this way and give Chile more waters for fishing etc, Peru says it should be drawn that way and etc etc).
Which means little or nothing to most of you guys up there, but it’s a pretty important thing in South America because it’s basically the last border territory dispute left on the continent (barring Colombia’s ongoing spat with Nicaragua but the Darien Gap being what it is, that one’s not really South America).
Less interestingly, the run-up to The Hague’s announcement is bound to involve heightening levels of bullshit nationalism and jingo assholery between Chile and Peru, two countries that try to make out that relations are good these days but the long-lasting emnity is only a surface scratch away. It’s going to be very boring story for the next 46 days and personally, my only hope is that the international beaks manage to come up with a ruling that makes both sides feel like losers. Then they STFU forever. 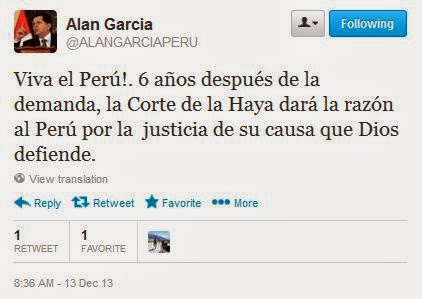 He must have taken time out between breakfast one and breakfast two.