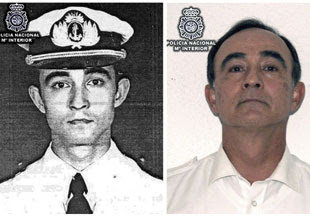 Julio Alberto Poch, then and now
A pilot running a regular, scheduled flight between Amsterdam and Valencia, Julio Alberto Poch was arrested by Interpol yesterday as his plane sat on the tarmac in Spain. This because he was one of the pilots that used to run the so-called “death flights” during the Argentina Dirty War of the 1970s and 1980’s and has charges against his name that include the responsibility for the deaths of 1,000 people.

Lillie over at the excellent Memory in Latin America site is on the case with this post that gives details and plenty of links for further perusal. She also put up another post from which I’m going to sample, just to give you an idea of the things Poch did 30 years ago. Congrats to the Spanish authorities for their sharp work and may Poch rot in jail. Here’s the extract from Lillie’s post that tells how a death flight worked:

They [the prisoners] were informed that they were going to be transferred to the south and would be given a vaccination for that reason. They were given a vaccination – I mean a dose of something to knock them out, a sedative. It made them drowsy.[…] Then they were put on a truck, a green truck with a canopy. We went to the military airport […] Then the subversives were carried out like zombies and loaded onto the airplane. (21-22)

In their unconscious state, the prisoners were stripped, and when the commander of the airplane gave the order, which happened according to where the plane was, the hatch was opened and they were thrown out, naked, one by one. That’s the story. A gruesome story, but true, and no one can deny it.