This is the report written on Liberty Silver (LSL.to) (LBSV.ob) that appeared in last Sunday’s edition of The IKN Weekly, issue 179. The only thing to have changed are the two price charts, because I didn’t save the ones from last week and have used the ones available on yahoo today which show the same thing, just a couple of extra days down the line. The rest is verbatim.
Liberty
Silver (LBSV.ob) (LSL.to): A scam and a screaming short (if it ever trades over
a buck again)
A number of weeks ago (to be quite honest, I can’t remember exactly
when) I did a quick pass check of a TSX listed company called Liberty
Silver (LSL.to) (LBSV) (LBSV.ob) on the suggestion of an IKN reader, but at
that time had made it an easy pass because of the low-grade marginal property
it was optioning into. I didn’t look much at the people or structure behind LSL
at the time as it was one of those companies I tend to filter out quickly as
“not reaching first base”, place in the mental discard pile, simply avoid from
that point and move on to other potentials. It’s a pity I didn’t look more
closely at LSL at the time because if I’d done so I would have seen a screaming
short candidate.
Cut to last week, and on Wednesday
I was pointed in the direction of LSL by a contact, someone who knows both the
property and had checked behind the company curtain, and told me in no
uncertain terms that the company was a scam. I saw the recent share price
run-up… 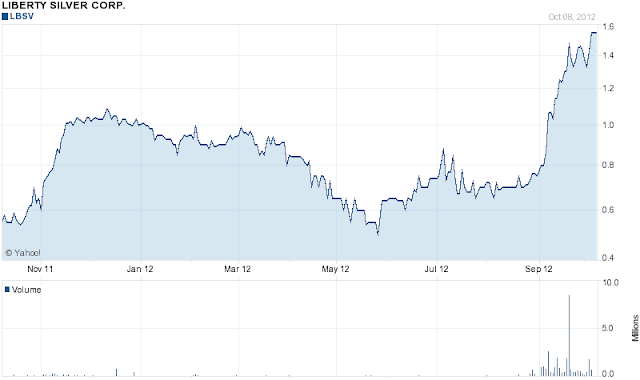 …downloaded the SEDAR files,
checked through them and suddenly LSL was past first base and onto second, but
this time as a potential short. And when I saw the name of the person who was
running the show from backstage, a certain infamous Bobby Genovese, it went
straight to home run. With the price running above $1.50 on Thursday on strong
volume and no real news and listing in the USA on the OTCBB (that does most of the volume) and on the
TSX as LSL.to (note, not a Venture
exchange listing) this had the makings of a great shortable story to put
before you today and one that many of you (I
admit not all, because shorting Canadian stocks isn’t child’s play and much
easier if you’re an accredited investor or inside an insto) would be able
to play to the downside.

Then on Friday morning, my big idea
was shattered by this (22), an SEC news release halting trading in the stock.
This halt was well reported in the press, for example this (23) the link to a
Stockwatch report on LSL last Friday evening written by the always good Mike
Caswell, which also adds background to this scam and is well worth reading. So
anyway, pre-bell Friday the SEC put a ten day trading halt on the otcbb listing
which was emulated very quickly by IIROC in Canada (not before 138k shares had traded through at a big drop price of 97c,
but to be honest IIROC did pretty well under the circumstances to block trading
in LSL.to as quickly as it did and should be commended). We can see the
effect the halt had on the stock via the few trades that got through before the
Canadian listing was halted, in this five day chart: 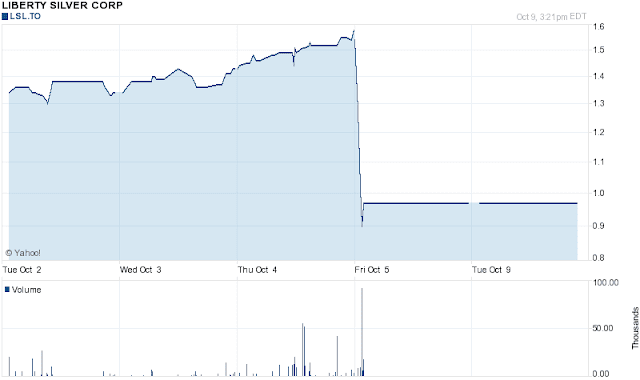 As the LSL NR later that day (24) (after
the bell in fact) confirmed the halt and added some flavour to the reasons
behind it
According to the Order, the
SEC states that, “It appears to the SEC that there is a lack of current
and accurate information concerning the securities of Liberty Silver because of
questions concerning publicly available information about Liberty Silver, the
control of its stock, its market price, and trading in the stock”
We can translate that for you. It
means that the SEC believes there is at least one large holder of LSL stock
(and probably more than one) that has not done the right thing and filed their
total holding in the stock to the authorities. These are known as “undisclosed
free trading shares” and the problem is that the person who owns them can
suddenly decide to dump some or all of that large holding on the market without
anyone knowing who the seller might be. And if, as is almost certainly the case
in this story, the large holder is an insider at the company, the sales can
easily be made at the most advantageous
moment for the seller. Or put in simple terms, the cloak of anonymity
makes the “dump” part of “pump and dump” a whole lot easier and probably much
more profitable. It’s also illegal, which is why the SEC has halted the stock
to give time for investigations.
About the
people behind Liberty Silver
Before we jump in to this section,
I’d like to make clear that some of the information that follows comes from an
as-yet unpublished report that was sent out by persons who wish to remain
anonymous (for obvious reasons) to myself and to a mailing list that includes
industry professionals and journalists who have shown interest in this scam, in
LSL the company, in the history and track record of Bobby Genovese and in
market scams in general. They are concerned investment professionals who want
real reform and better regulatory oversight of micro and small cap issuers and
have assured me that they are not short (or long for that matter, no position
at all) Liberty Silver. I also know the ID of at least one of the people who
authored the report (again, will remain anonymous) and will personally vouch
for that person’s trustworthiness, absolute integrity and track record of
hunting down market scumbags. The report is excellent and goes deeply into the
background of the unwholesome people behind this scam, highlighting the many
other examples of otcbb pump and dump scams they’ve been associated with over
the years, going into detail as to how LSL has been set up and also marking
your cards on two other companies currently being set up as pump and dumps
scams by Genovese and his crew.
What follows is a quick rundown of
datapoints on the corporate structure and people behind LSL, unearthed by your
author in the period Wednesday to Friday as well as a few of the many datapoints
revealed by the report. It’s not as long as it was going to be if the SEC
hadn’t halted the stock and scuppered the potential short play, but it should
give you more than enough idea.
The company has around 81m shares
outstanding. Around 65m of those shares were issued at a fraction of a penny
and are now held in offshore accounts (that’s
reliable off-record).

Most of those 65m very cheap shares
are held by Robert Donald Bruce Genovese, known to friends and foes alike as
Bobby Genovese or sometimes simply “Bobby G”. We’ll call him ‘Genovese’ from
here on because I have no desire ever to be on first name terms with this
scumbag. Genovese also bought a fair whack of LSL shares over the OTC market in
the period December 2011 to January 2012 at prices at or around one dollar (25)
at the same time as a placement that raised $4.6m (the qualifying placement for the company’s TSX listing) was running
on the stock, units priced at 50c. From these transactions, we know that he
controls at least 10% of the company but that’s almost certainly the tip of the
iceberg and he holds a lot more of these shares. Based on information from
reliable sources, Genovese holds at least 48m shares of LSL that come from the original
transactions and forward splits that set up the company structure we see today.
However, it’s necessary to state that this 48m holding is not officially known
and in fact the lack of disclosure on Genovese’s part is likely one of the main
reasons the SEC halted the stock pre-bell Friday morning, so in the course of
the next few days I’d expect clarification on this matter.
Genovese is a penny stock pump and
dump scam runner and has made millions of dollars for his own back pocket by
unscrupulously ripping off the general public over the years. That’s not an
opinion that’s a fact, as anyone who watched the action and events around
“Clearly Canadian”, a mineral water company that shot higher and dived lower in
the period 2005 to 2008 will testify. According to SEDI insider transaction
records Genovese had access to millions upon millions of very cheap shares and
proceeded to dump those millions of shares on the general public while in
charge of the company at the time. His aggressive selling continued up to the
point when the share price, that tended to fluctuate between $2 and $4.50 (the average between $2.50 and $3), collapsed
back into the pennies region. He used highly aggressive pumping techniques,
including paying pumpers to do his dirty work and sucker in as many retail
shareholders as possible, then when the stock was high enough he cashed in
relentlessly. 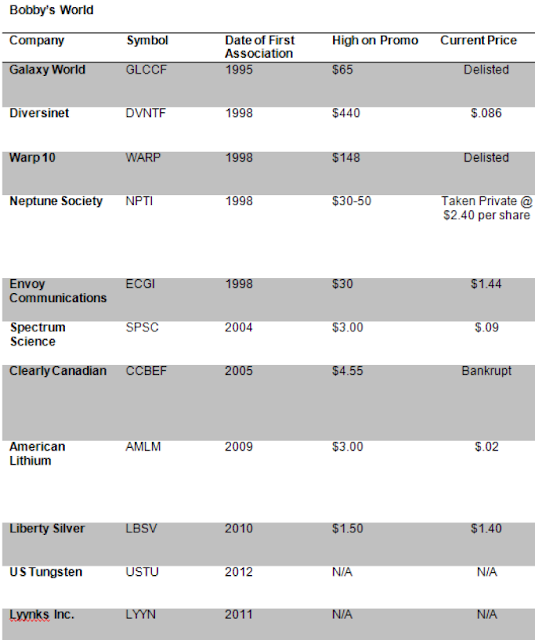 ‘Clearly Canadian’ is not his only pump and
dump scam either, not by a long chalk. The last 20 years is littered with the
remains of companies he has promoted, pumped, dumped and cashed in with, all to
the retail shareholders’ chagrin. The table above is from the mentioned report
(I asked for and was denied permission
from the authors to pass on the whole PDF, but was granted permission to sample
from it, including the sampling of this table). For further reading I also
point you towards to this report (26) by Carol Remond of Dow Jones Newswires
dated November 2009 that goes into the world of Genovese and some of the scams
that he has successfully led. Genovese is now by all accounts a very wealthy
man, but he’s made his money the parasite’s way.