Lime Slime’s Brazil: Corruption and slush money in the Lula government? Surely not! 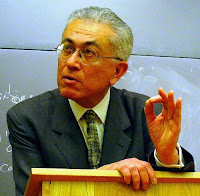 Robert Mangabeira Unger (for it is he)

Serious journalism is alive and well in Brazil, especially at O Estado De S. Paulo, known as Estadao by its fans. I’ve long thought of it is the best paper in Latin America. Excellent writing, rigorous and independent. It’s editorial page is too far right for me on social issues, with a conservative Catholic slant that sounds outdated in contemporary Brazil, but the rest of the paper is top notch. And today, they have one of those great articles explaining more or less how political parties finance themselves here.

Lula’s party, the PT, controls 6 of the biggest 10 pension funds of the so-called estatais, the state-run companies. These are BIG, and historically have been one of the few sources of long-term financing in a country that, before the latest commodities boom, had a very low domestic savings rate. The funds include Previ, the fund of Banco do Brasil, Petros of Petrobras, you get the picture.

The execs at the funds are named by political parties, and most of them were put in place by Lula’s former right-hand man, Jose Dirceu, who quit the cabinet during Lula’s first term during a corruption scandal that almost cost Lula re-election. In that scandal, the PT was buying votes in Congress to get bills approved. The other guy who appointed PT allies to the funds was Luis Gushiken, an old union hack who formerly had a job as chief propagandist and whose office had an obscenely large budget, before the corruption scandal got him.

Why do they want to control the funds? Moolah. Parties have two basic ways of raising cash. They can either take kickbacks on concessions for things like bus routes, or they can dip their hands into the pension funds. Accounting at the funds has historically been opaque, even though some of them make smart investments and build important stuff. But it’s time for Brazil to clean up these conflicts of interest.

Many of Lula’s buddies from the union movement are now managing billions of dollars in cash. Why? What do they know about investments? One of the opposition parties is pushing for a Congressional investigation of the funds, which would damage Lula. Robert Mangabeira Unger, the Brazilian dude on leave from Harvard Law school who speaks Portuguese with a gringo accent, once called the pension funds the most sordid, nefarious area of Brazilian politics. But that was before Lula hired him as his “Secretary of Long-Term Planning”, a ministerial level post where he runs his own one-man think tank. Why don’t you tell us what your plans are, Mangabeira?