Lime Slime’s Brazil: “We really are a racial democracy…really!”

Yes indeed, our now-becoming-regular Brazilian expert guestblogger Lime Slime is back with another dispatch about The-Biggest-Country-In-The-World-Except-The-USA-Only-Cos-They-Added-Alaska-And-That’s-Cheating. No more silliness from Otto, let’s hand it over to Lime Slime. 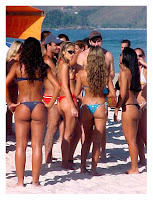 Favela residents? Errr…no
Many Brazilians, especially rich ones, have long clung to the myth of “democracia racial,” or “racial democracy,” a term coined in the 1930s by the academic Gilberto Freyre in an attempt to explain why there was less overt racism in Brazil compared to the United States. His idea, which has since been discredited, pointed out factors that make Brazil’s racial situation different.

A couple of obvious examples: After the end of slavery, Brazil never had laws imposing segregation and many Portuguese colonialists raised the children they had with African slaves as their own, and as part of the family, instead of sending them to the fields, like, say, Thomas Jefferson. As a result, nearly all of Brazil’s oldest families, the five century variety, have black ancestry. Former President Fernando Henrique Cardoso often said that he had a “foot in the kitchen,” a slang way of saying some macho great-grandfather in his family shagged the help.

The mixing also happened among the poor. President Lula, from the dustbowl northeast, is listed as pardo on his birth registry, meaning any mixture of black, european and native. A third of Brazilians consider themselves pardo. So, sounds hunky dory, right? Wrong. Brazil has a large black population, a third to half of the population, depending on how you count, and blacks are disproportionately poor, suffering from the lowest levels of health, education and income. So what happens when say, you live in a favela in the hills above the port of Santos, Latin America’s largest, and you want to hang out at the beach? Well, you have to pay to sit on the sand!!! That’s right. Sitting on the beach will set you back 100 reais ($40), according to this article in newspaper Estado.

Brazilians love to think of the beach as a great equalizing factor in their stratified society, because
beachfronts are the only lands in Brazil that can’t be sold and which belong to the public. But it only goes so far. If you are poor, aren’t dressed well, stylish, primped, pretty, or tuned out with a rock hard bod, you aren’t welcome on a beach frequented by rich people with silicon implants in their asses. The people who own stalls providing beachgoers with beer, chairs, umbrellas, and snacks while they lush out in the sun say they charge the minimum consumption fee to keep out the “farofeiros,” or “trashy types.” Even Estado, while trying to fight the good fight, shows its inherently conservative side by framing the issue as one of classism, but not, gasp, racism. Doing so would offend the myth of racial democracy that rich, conservatives who read Estado believe.

So, please don’t believe the hype that Brazil is the world center of smiling, happy people who all feel the love. Racism, and to a lesser extent classism, define Brazil, and though the government has taken steps recently to deal with inequalities, even going so far as to set aside slots in public universities for students who consider themselves black, it still has a long way to go.