News through from the Huánuco region highland Peru today regarding the campaigning style used for those wishing to be elected mayor of the local towns.
The Town in question is Chacabamba and as part of his re-election campaign, current mayor Vidal Figueroa decided in all his wisdom to run a “Who can drink more than me?” competition as part of his vote-winning push, with a S/150 (U$53.50) prize put up for grabs to the person who could drink the most hard liquor during the allotted time. There were 10 competitors and the winner turned out to be 50 year old local Hernando Lorenzo. Having claimed his prize, Lorenzo then went home and that same night died in his sleep due to the effects of the copious amounts of alcohol in his body, according to the official autopsy. Five other competitors were also hospitalized for the effects of alcohol poisoning.
This photo was taken of Lorenzo leaving his house next morning. He won’t be able to vote for the Mayor, being dead and that. The mayor is now under investigation, orders of the local DA. 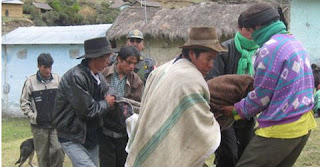