You have to admire consistency.
Back in 2015, Louis Lobito Little Wolf James told us about his Top Pick stock early in the year and assured us all that, “If I could buy only one stock this year, Rubicon would be the one”. Those of you who follow the mining market closely will know that Rubicon (RMX.to)…well…errr…let’s just say the trade didn’t quite work out the way Lobito planned:

But that hasn’t put our intrepid Little Wolf off calling Top Pick trades for 2016, oh no. Here’s what he gave as the splashy headline of the first edition of his International Speculator in 2016, out January 21st:

Move to the contents of the letter and we get the formal reco (also a direct clip from the letter, ain’t no faking it at IKN):

And to make sure you fully understood the timescale… 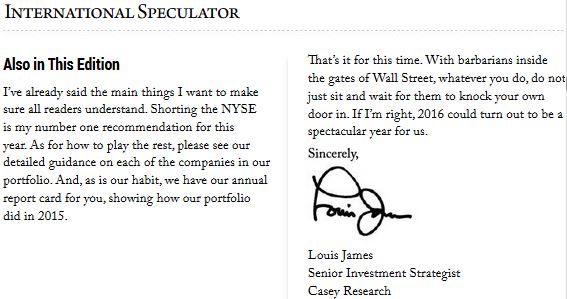 …yup, no doubt about it, this is the Lobito Top Pick trade for the year we know as 2016. So how is that Casey Research Top Pick trade in SDS getting on since it was published on January 21st 2016?