Luis Arce Gómez, shining example of the South American dictatorships that were supported by the North 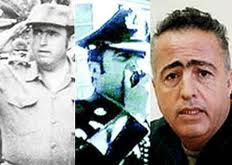 Luis Arce Gómez
So what do you call a member of the 20th century dictatorships, now in jail after evading justice for decades, who is now looking to swap details of the whereabouts of disappeared people for a reduced prison sentence? Scum of the earth? Top prize shit amongst prize shits? Ladies and gentlement of the northern industrialized countries, meet Luis Arce Gómez, a person you brought into and kept in power in Bolivia in the 1980’s via your tax dollars and your governments. The report below a translation of this:

Potosí, 21 Sep (Erbol): The Ex-Minister of the Interior in the de facto government of Luis García Meza, Luis Arce Gómez, ratified on Tuesday that he is willing to reveal the whereabouts of the remains of people disappeared during the dictatorship in which he participated between 1980 and 1981 in exchange for a reduction in his sentence.
Arce reiterated his offer in a brief contact with reporters in the public attorneys office in La Paz, where had had been taken from the Chonchocoro prison to give a declaration as witness for the charges brought by ex-Congressman Bernardo Montenegro against ex-public attorney Jorge Gutiérres, who is supposed to have been an informer during the García Meza dictatorship.
“I’m going to negotiate (my possible early release from jail), if they want to know something (about the disappeared) I need to get something as well, nothing is free in this wprld and everybody benefits (from this type of information). I’m willing to speak on this and plenty of other things.” CONTINUES HERE