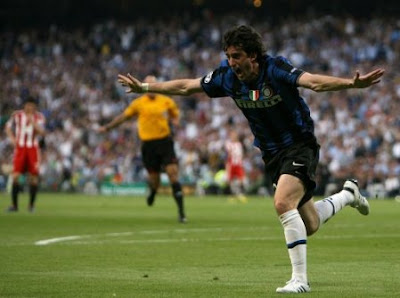 Diego, two seconds after putting Inter ahead this afternoon
Milito rules today. Two goals, a 2-0 win for Inter, Champion’s League wrapped up, end of story. Here’s footage of the first goal, a striker’s classic (and fwiw the second goal, his 50th of the season, is even better as a showcase of how clinical he is).
For sure Mourinho will harvest the plaudits, but without a magnificent goalscorer no manager wins. And you guys think the Albiceleste will only be about Messi in South Africa? Think again.