Here’s an interesting mail, received from A. Reader yesterday. It’s about one of the companies caught up in the BridgeMark scam and, lo and behold!, it was pumped by Gwen Resource Maven Preston to her subscribers at the time the P+D was in full swing. My, what a coincidence! It was also pumped by the so-called “Equity Guru” Chris Parry, who also makes full use of the Vancouver scamster central website CEO.ca to push his nefarious agenda. Yep, that is indeed the Tommy Humphreys site and….oh wow! Tommy was in on the Kootenay placement as well! My, another sheer coincidence.
People, the M.O. of the Vancouver newsletter scam cabal is on full show, right here. And if you think this is some sort of isolated incident, I pity your poor hide. 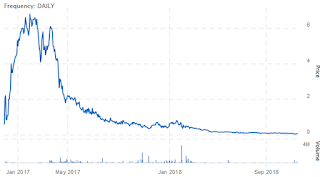 Sir,
I applaud your efforts in shedding light on the
junior mining newsletter writer (NLW) business, really more a
promotional business than anything approaching an analytical one, with
rare exception (you, Kaiser, Exploration Insights, that’s nearly it).
As
you rightly point out the Resource Maven is a particularly sneaky
scamster, and the recent BCSC “Bridgemark” kerfuffle has swept her into
the mix, albeit tangentially, regarding one of her picks, Kootenay Zinc
(ZNK) (no company website, always a good sign).
One
of the beauties of the CSE is its “open kimono” Form 9 distribution
report which specifically names all PP subscribers (unlike the TSX
equivalent, in which subscribers’ name are kept confidential). See here for the Jan 2017 Kootenay Zinc Form 9, which lists Gwen Preston (plus Tommy Humphries, Chris Parry, among many other characters) as
subscribers to a $0.20/unit PP (shares plus half-warrant @ $0.30/share
strike price). Interesting to note that by the time the PP closed the
shares were trading at about $0.55/share, so the placees seem to have
gotten one hell of a deal. What a shrewd and lucky lot!
Henceforth did the pump well and truly begin, including this podcast appearance by the Maven within mere days of the PP closing. The placement holders didn’t even have to wait the normal four months either, as ZNK changed the tersm to allow them to liquidate 25% of their holdings at the end of February, while it was still a forty cent stock. Thay got another 25% out in May, but by that time the collapse was in full gear. The stock has since done a
10:1 rollback and now trades for $0.06/share (or $0.006/share on a
pre-rollback basis, i.e. less than a penny). If you’d bought shares at
$0.50 (pre-rollback basis), you would have made a whopping return of
negative 98.8%. What fun for Maven subscribers!
The
simple fact is that 90% or more of junior mining NLWs are pumpers
looking to dump their cheap shares on their flock, the latter of whom
actually pay for that masochistic privilege! NLWs, by and large,
are promoters full stop. Far from adding luster to a story, their
involvement in a stock should be viewed by anyone outside that company’s
inner circle as a kiss of death.