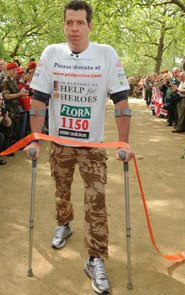 A SOLDIER who defied doctors to complete the London marathon crossed the finish line today, 13 days after he started the 26.2-mile course.

Major Phil Packer was told by medics that he would never walk again after being badly injured in a rocket attack in Basra last February.

Today the 36-year-old, who is a paraplegic after suffering heart and spinal injuries, completed the race.

He walked two miles a day on crutches after starting with other competitors on April 26.

The soldier, who served in Bosnia, Kosovo, and Northern Ireland hopes to raise £1m for the soldiers’ charity, Help for Heroes and has £370,000 more to raise to hit his charity target.

Still undergoing physical rehabilitation at Headley Court in Epsom, this afternoon Maj Packer was greeted by hundreds of well-wishers who lined the final mile of the course.

As he crossed the finishing line, at St James’s Park on the Mall, he said the feeling was “bittersweet” coming so soon after more serving soldiers lost their lives in Afghanistan.

Yesterday the soldier dedicated his long walk to all his comrades who have lost their lives or suffered disabling injuries in conflicts across the world and thanked medical staff who helped him achieve his mammoth task.

He wrote on his website: “A year ago I never thought this would be possible and there are so many to thank, Stanmore Hospital and the MoD/the Armed Forces have been outstanding to me; I am walking because of them – I know I am very lucky to have this mobility so many others are not. This is for those who cannot be there tomorrow.”

He was presented with his London marathon finisher’s medal by Sir Steve Redgrave after completing the course.

On crossing the finish line he thanked the public for all their support.

He said: “I’ve walked 52,400 steps and somebody has walked with me every step of the way, be it a dinner lady, a London taxi driver or a Metropolitan Police officer.

“I’ve had time to talk to people and have conversations, people have really opened up about their feelings about the Services and it has been humbling.

He added: “I wouldn’t be standing here now if it wasn’t for the staff at Headley Court.

I feel that I am very lucky so many people I met along the way are more injured than I am.”

Next month Major Packer will attempt to climb El Capitan in Yosemite National Park in California, and he intends to complete 4,000 pull-ups over a series of days in order to reach his fundraising target.

Major Packer has already rowed the English Channel in just over 15 hours and completed a sky-dive as part of his fundraising efforts.