Map of Peru with Pucallpa city marked
If you go over to the core values page at Maple Energy’s (MPLE.L) website you read that…..
“We value employee and public safety and respect the environment”

…..as well as other things such as having high ethical standards and being committed to excellence. As is so often the case, this corporate babble isn’t worth the pixels it’s printed on. The following Youtube video came up on my radar today, thanks to the Red Ucayali blogsite that keeps a close watch on how companies in the jungle region of Peru operate.

It turns out that Maple Energy respects the environment a lot less than it claims in its corporate literature, because a local Pucallpa TV station recorded images of the Maple Energy emergency team mopping up oil pollution from a company pipeline leak. But that’s just the start of things, because amongst other things in the report:

One of the other things that Maple Energy boasts on its website is the good relationship it enjoys with Peru government and officials. Well that one might mean something positive in good old anglosaxon North, but anyone who knows Peru can decipher that code very easily. It’s also worth noting that the rich and influential Peruvian Pension Funds jointly hold around 15% of all shares outstanding. So it comes as no surprise to hear in the report that neither Peru’s oil watchdog OSINERG nor the Ministry of Energy and Mines has so much as mentioned in passing the problems Maple Energy is causing to the Amazon Basin environment….so far, at least.

So maybe after reading all this you’re not as impressed with Maple Energy as you could be and you’d like to complain in your own way. Well as MPLE.L obviously doesn’t give much of a damn about things a letter to its IR department representative Alphonso Morante might not be the best method. However, as the IFC (International Finance Corporation), which is the financing arm of the World Bank, is a 6.2% shareholder in Maple Energy you might like to drop them a line and ask them how long they will continue sponsoring a company that uses a 50 year old permanently leaky pipeline that does far more harm than good to its host nation. 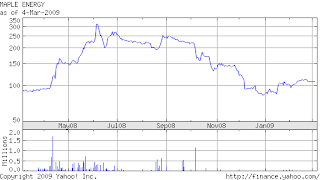