Mariner Energy (ME) kaboom, but maybe Shute might want to reconsider his ‘long MCF’ call 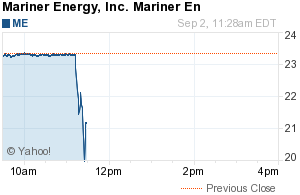 NEW ORLEANS — One person is missing after a rig explosion in the Gulf of Mexico, about 80 miles south of Vermilion Bay, the U.S. Coast Guard said.It happened around 9 a.m., and as of 10:15 a.m., the rig was still burning, the Coast Guard said. Rescue crews from New Orleans and Houston are responding.Officials said there were 13 people aboard the rig, and all but one are accounted for.Two helicopters from Houston and three from New Orleans are responding to the blast. Two other fixed-wing planes and two cutter ships are also responding, the Coast Guard said.The rig is owned by Mariner Energy.