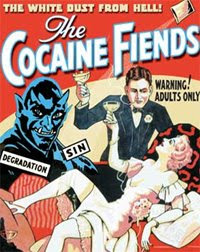 This week has not been a good one for the narco scum. First there was the cocaine factory discovered and dismantled in Santa Cruz, Bolivia on May 7th. It was just being set up, had U$1m of chemical raw materials ready to roll and was estimated to be able to churn out 1.5 metric tonnes (MT) per month. The Bolivian specialist (and brave and very successful) FELCN, without the aid of the DEA, did the legwork.

Then yesterday, Venezuelan authorities arrested three people and confiscated a cool 2MT of cocaine. Again, no DEA. Again, a country supposedly unhelpful in the fight against narcotrafficking.

But today the mother of all seizures went down today in that other AxisOfEvo country, Ecuador. Three Ecuadorians and two Russians arrested, and 17MT (yep, seventeen metric tonnes) of cocaine that was on its way to Spain. In fact, the Ecuador police are still counting up the haul (it was hidden in a cargo of molasses) and say it might even get to 21MT.

Meanwhile, all quiet on the confiscation front in Colombia and Peru, the world’s two biggest suppliers with an anti-narco squad run by the US DEA. Funny that, innit?

UPDATE: My mistake, Peru along with a US frigate managed to grab 250kg of cocaine in an offshore raid.