McEwen Mining (MUX): Look into my eyes…you are tired…you are feeling sleepy…sleep…

I have come to the conclusion, after staring hard at its 2q16 production numbers, that the only logical explanation as to how McEwen Mining (MUX) can command a one billion dollar market cap is mass hypnosis. Just one set of numbers, those of its 100% owned El Gallo mine. Here’s the average gold grade and even though it dropped significantly in 2q16, it’s still way above the M+I resource grade of 1.54 g/t. 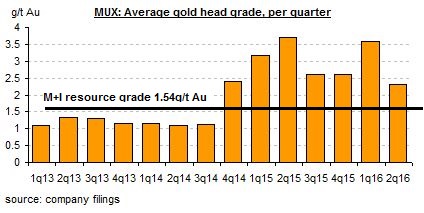 And as MUX has guided El Gallo for 55k oz Au in 2016, that means it’s going to return a couple of 10k oz quarters in what remains of the year. 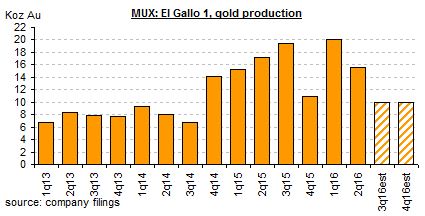 And that makes sense if you accept the fact that MUX high-graded its mine for a couple of years to get itself out of a tight spot, but really it’s just a 40k oz per year asset. And, give or take, El Gallo is half the NAV of this company! I feel like I’m taking crazy pills.