Meanwhile, in the quiet provincial border towns of Colombia…. 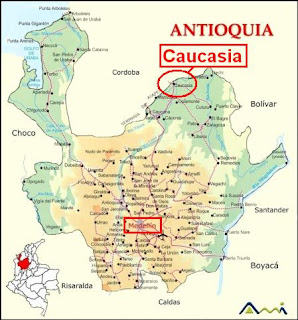 …they’ve got no space left in the morgues.

In Caucasia, Antioquia, medics are complaining about the heavier that normal workload of autopsies. In the period Jan 1st to April 25th 2008 there were “just” 46 murders in an otherwise sleepy old town, but this year it’s got up to a pesky 102 in the same lapse. “Here we only have one autopsy table and two old storage compartments, and on average we’re doing two autopsies a day”, said the doc.

As for the atmosphere around the place, here are a few quotes:

“The rumours run from neighbourhood to neighbourhood, but nobody knows anything when they’re asked about a crime.”

“They say that two men were in a hairdressers. On hearing a woman talk about the conflict they made the hair stylist shave her bald and remove her eyebrows, and then gave her 24 hours to leave Caucasia.”

“The assassins rent one house in every neighbourhood, which allow them to hide quickly once they commit a crime and we (the police) cannot enter without a search warrant.”

“The people fear for their lives, because those committing the homicides are locals, young men that were born and raised here.”

So, gentle reader and lover of freedom, how does the situation in Caucasia compare to the US-backed shouts of “oppression!” that comes from the mouths of theVenezuelans with painted hands as they march noisily down streets tilting against windmills? The above is what real fear, real terror and real oppression are all about. When it’s the genuine article, noise is replaced by a roaring silence and you rarely get to find out about it.