…the Canadian brokerages and their analysts will always return to Minefinders (MFN) and call it a buy again after dropping it, like meth to a junkie. Today’s relapse is suffered by Trevor Turnbull of Scotia, with this little write-up from Scotia nerve centre reaching your author’s inbox just a few minutes ago:

MFN-US: Still Oversold Despite Progress (NEW 1-SO, US$15/sh target, Trevor Turnbull ): Trevor Turnbull is re-launching coverage on Minefinders(MFL-CN, MFN-US) with a 1-SO rating and a US$15.00/sh target (ROR of 56%).  MFL is very attractively priced trading at a deep 28% discount to his NAV of $13.36/share.  The mill feasibility study expected this year should increase the Dolores valuation by 26% which he uses in his base case NAV (given they raised over US$150M to finance it in December 2010) – but Trevor adds the market is yet to embrace this scenario.  With improved performance from Phase 2 leach pad and the proposed mill option which serves to increase overall recovery (especially for silver) – Trevor believes MFL is good value and not a value trap.  Furthermore, Dolores has the potential to grow from new discoveries peripheral to the pit as well as from deeper higher-grade underground mineralization. 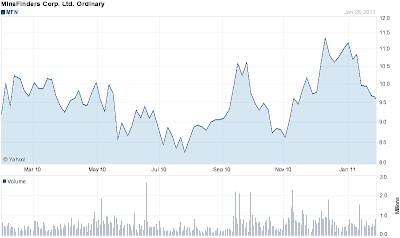 Hey you never know, this time might be different, Trev. Good luck on the call dude…and I mean it.