Here’s a photo of the newspaper advertisement run by Minera IRL Team Hodges in a Peruvian newspaper today (that’s costing you the shareholder money, of course): 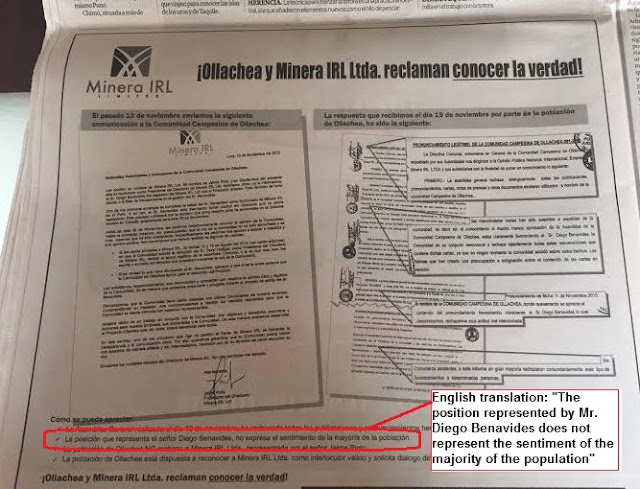 Please note that Team Hodges has included the so-called declaration of the people of Ollachea in the advert. And underneath they write in Spanish (translation your author) “The position represented by Mr. Diego Benavides does not represent the sentiment of the majority of the population.”
Okay, we got that straight? Now for three facts:
1) Thanks to his source inside Team Hodges, your author has today seen a copy of the full declaration that’s featured in the advert above, including the signatures page.
2) It is signed by a total of 147 people.
3) The Official Registry of Community members of Ollachea has a total of 760 people.
Therefore we can state that even if all the people who signed the Team Hodges declaration are legit (and let us recall that the Community has already identified and reported to Peru’s Ministry of Energy and Mines that there are false signatures on the list) and even if all signatures were voluntary (they weren’t and there’s proof of that as well, again in the hands of the relevant authorities) and even if all the names on the list are real members of the community of Ollachea and on the official list, the number of people who signed on represent 19.3% of the town’s population.

Seriously Jaime Pinto, is that all you got? After the bribes, the threats and the corruption? And from that you put together this smear campaign to try and fool people into voting for you? Even without the criminal charges now hanging over the heads of you and your cohorts, it’s pretty pathetic.
I mean, would you hire a man as a company head who can’t do math?