What follows is the letter sent by Minera IRL executive chair Daryl Hodges to the president of the Ollachea community. In it we see how the two-faced liar Hodges has suddenly changed his tune, realizes just how his plan to screw everyone is falling apart and is now trying to butter up the community with such choice phrases as “I give my word”. Bless his heart. This from the person who screwed Tyler Resources, screwed Jennings Capital, siphoned off undeserved bonus payments into his own back pocket and deliberately ignored the express wishes of the community in order to remove the only serious threat to his coup d’etat on the company. His word…incredible.
What the following letter amounts to is another attempt by a gringo to buy off what he thinks are ignorant locals with a few shiny beads. Big big big mistake you motherfu0ker, the people in Ollachea have more integrity in their little toenails than you and your band of thieves have combined. The people of Ollachea are already laughing out loud at your stupidity and by way of fair warning, I’d strongly, but strongly suggest that if they offer you a one-on-one meeting at the town itself, with none of your team allowed to accompany you, that you don’t take them up on the offer.
Anyway, here’s the letter he sent which arrived and was registered received tonight August 26th at 6:15 local time, just over two hours ago. By the way, the letter was delivered to Señor Valeriano by one of the company geologists, who also just happens to be the brother-in-law of IRL’s VP Exploration. Y’know, what with the company’s new high directive so keen about the potential for nepotism.
Oh yeah, final thing: That’s the real e-mail address Hodges left at the bottom of his letter. Just in case anybody out there fancies sending him a mail and telling him what they think of his leadership qualities.
xxxxxxxxxxxxxxxxxxxxxxxxxxxxxxxxxxxxxxxxxxxxxxxxxxxxxxxxxxxxxxxxxxxxxxxxxxxxxxxxxxxxxxxxxxxxxxxx

Lima August 25th 2015
Señor Juan Luis Valeriano Gutierrez,
President
of the Rural Community of Ollachea, directors and population in general
It’s a  pleasure to contact you and all the population
of Ollachea. This letter is intended to reiterate my desire and commitment to
continue working with you and maintaining a good relationship between company
and community, in which I make clear that the new directors (of Minera IRL will
respect the social commitments that the company has with the community.
I have seen
that since August 14th there has been totally erroneous information
published in several publications that does not reflect reality or regarding
the intentions we have as a company with the community of Ollachea. At the
same time, many of the publications have stated that I lacked respect, which is
not part of my character and something I would never do.
Any change
can at times generate certain fears, but I give my word that it won’t be this
way, this change will improve both the company and the community.
Myself as
representative of the company have the greatest will to continue a harmonious Company/Community
relationship, working closely with you in a direct way to assure that the both
present and future commitments we assumed are complied with, which reflect in
positive changes for the community.
I hope to
co-ordinate  meeting with you at which we
can converse openly in order to get to know you and listen in order to reach a
joint agreement, to be able to talk calmly and in detail about all issues that
are of interest to you, so that you can get to know me as a person and a
professional, my ethics, my transparency and my great interest in beginning to
work with you as the highest ranking executive representative of the Minera IRL
company, where both community and company will win with the Ollachea project.
I look
forward to your reply so that we may meet soon. Please communicate with me via
the e-mail address below.
Sincerely
Daryl
Hodges
dhodgesminera@gmail.com
PS: Here’s the original, so that you bilinguals out there can decide whether my translation is fair (hint: it is): 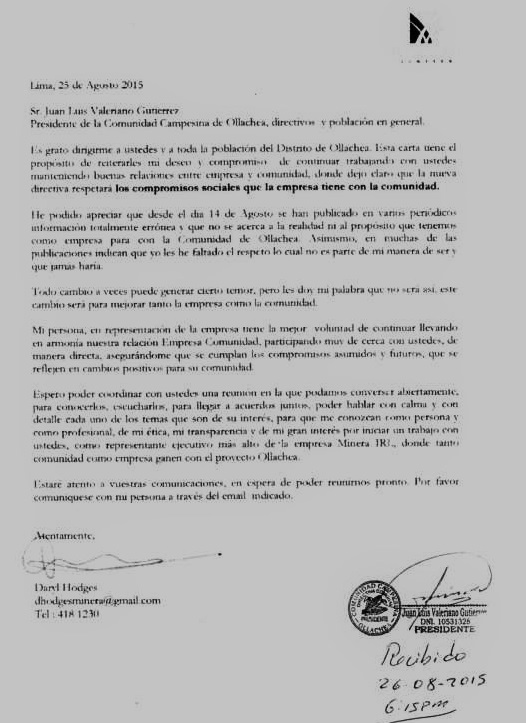