Minera IRL: What this sneaky board is planning, what you can do to stop them

“If it looks like a duck, and quacks like a duck,
we have at least to consider the possibility
that we have a small aquatic bird of
the family anatidae on our hands.”
Douglas Adams
Minera IRL is a company with a board of directors that has no right at all to the presumption of innocence. That’s clear after the crap we shareholders had to put up with in 2015 from Team Hodges, but now the new board are trying to play us all for fools again. I for one am not going to stand idle and watch somebody else screw me over and luckily, I can also speak for the group of Peru shareholders I met with yesterday who aren’t going to stand for this corporate rape, either.
Without any sort of announcement and leaving less than a month, the board of Minera IRL called the AGM for November 30th via the Management Information Circular filed to SEDAR a few days ago. They want to keep it quiet and low key, they don’t want shareholders to hear about the meeting of take action and when you read the agenda of the AGM, you get to see why.
It’s a long document but here are two of the key pieces. This bit tells you what they plan to do with listings:

“…with new Articles of Association (the “New Articles”) in substantially the form attached to this Information Circular as Schedule 1. The primary reason for replacing the Existing Articles with the New Articles is to provide the Company with a modern set of Articles of Association tailored to the Company’s primary trading market in Canada. The Existing Articles were tailored to conform to the requirements of two trading markets – the AIM market of the London Stock Exchange and the Canadian Toronto Stock Exchange (or TSX) – but the Company is no longer listed on the AIM market and has no intention of seeking to renew that listing. Some of the provisions included in the Existing Articles were adopted in order to conform to standards that are customary in the AIM market but not in the Canadian capital markets; these provisions are, on the whole, more restrictive than customary Canadian corporate and capital market provisions. As the Company is at the date of this Information Circular actively pursuing a listing on a Canadian stock exchange, management believes it to be in the Company’s best interest to adopt Articles of Association that will enable it to carry on its business and access the Canadian capital markets without the more restrictive AIM derived provisions imposed in the Existing Articles.

Want that in English?
1) This board is abandoning all UK based shareholders.
2) This board wants to give itself the right to do whatever it wants with the company, no oversight or control, starting with the freebie giveaway of 115m shares.
But that’s not all. In no place is there mention of the re-listing of shares in Peru, the fact that has angered Peruvian shareholders so greatly. And those shareholders told me yesterday that they have heard from inside the Lima Stock Exchange (BVL) that a few weeks ago the Minera IRL board stopped all the paperwork and necessary actions to re-list there. It’s plain that they are leaving Peru shareholders for dead, too. All this band of miscreants wants to do is list IRL on the CSE in Canada (not even the TSX or TSXV).
And here’s a second short snippet from the MIC with more on that share sale:

“…directors be authorized in accordance with Article 5.1 and 6.4 of the Articles of Association of the Company to allot up to a maximum of 115,567,514 ordinary shares, being 50% of the current issued share capital of the Company, free of pre-emptive rights. This authority is being sought to give the Company flexibility to make further issues of ordinary shares in order to raise capital for the development of the Company’s portfolio of properties, the Ollachea project in particular, and for general corporate purposes. This authority will expire on the date of the next annual general meeting. As at the date of this Information Circular, the Company held no treasury shares.”

What’s interesting here is that they don’t tell us what they want to do with the shares, apart from the vaguest of terms such as “raise capital” and “general corporate purposes”. After being fooled around by the previous boards in 2015, we as shareholders need more than this. To repeat, these people lost “innocent until proven guilty” a long time ago, they can either be transparent and up front with us, or they can be considered guilty of trying to screw us all. The non-disclosure and total lack of detail in this MIC means they’re trying to screw us, be in no doubt. And if you let them, they’ll probably do that the very day after the AGM.
And these people have no skin in the game at all. None of the current board of directors owns a single share of IRL, but they want to give themselves the power to allocate over 115m shares to whoever they want, at any price they want, with no further control mechanisms allowed by the real owners of the company, you and I. That’s crazy.
I therefore propose two things:
1) You contact the board of directors and tell them what you think of their plans, demand far more transparency from them, insist they do their job and maintain their fiduciary duty towards shareholders.
2) If not, vote them out on November 30th.
And to that end, here are the e-mail addresses of the Minera IRL board of directors. Feel free to use them.
Derrick Weyrauch (the architect of the plan to decimate shareholder value):

Robert Schafer (the main partner in crime)
schafer_rw@comcast.com
Julian Bavin (the third willing member of this corporate asset rape)
julianbavin66@gmail.com
Frank O’Kelly (the person allowing this rape to happen on his watch)
fokelly@icloud.com
Gerardo Perez (Peru COFIDE link being left in the dark by the others)
gerardoperezdelgado@gmail.com
We need to vote this board out and get one in that represents our
interests. If not, it’s clear these people currently in charge are going
to sell us all down the river. So get your proxy form from Computershare or SEDAR and fill it in the following way, fellow shareholder: 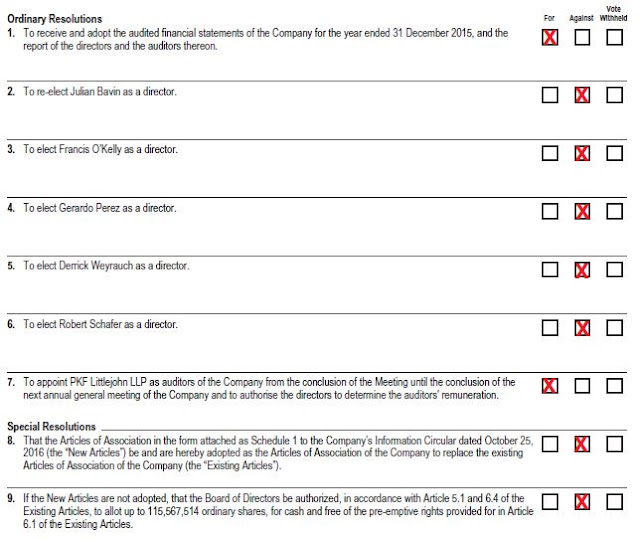