Miranda Gold (MAD.v): And a mad time was had by all…directors 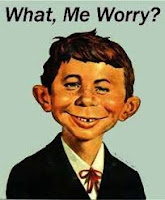 Here’s one that made me giggle, sent by a friend who was sent it by A Concerned Citizen. Back in late January, Miranda Gold (MAD.v) ran a $1.5m placement in order to raise funds for paying management to do nothing business and exploration and stuff. All normal so far, but then on February 1st they announced this:

Feb 01, 2018Miranda Modifies Terms Of Recently Announced Private Placement
Vancouver, BC, Canada — February 1, 2018 — Miranda Gold Corp. (“Miranda”) (TSX-V: MAD) announces
that it has modified the terms of the private placement announced on
January 8, 2018. Miranda now proposes to raise up to $1,720,125 by way
of a non-brokered private placement through the issuance of up to
31,275,000 units at a price of $0.055 per unit (a “Unit”). Each Unit
will consist of one common share and one non-transferable common share
purchase warrant (a “Warrant”). Each Warrant will entitle the holder
thereof to purchase one additional common share of Miranda at a price of
$0.12, until expiry four (4) years from the date of closing the private
placement. The Company
increased the total amount to be raised in this placement by $220,000 to
accommodate increased participation by the Board of Directors and
management.

Now you’d think that a good thing, right? Four officers of the company had decided to chip in with their own money on the placement to the tune of $220k. That’s a positive thing normally, yeah? Skin in the game, money where mouth is, belief in the company and its projects etc etc etc.
Yup, all good normal and fine, right up to the moment the quarterly financials came out: 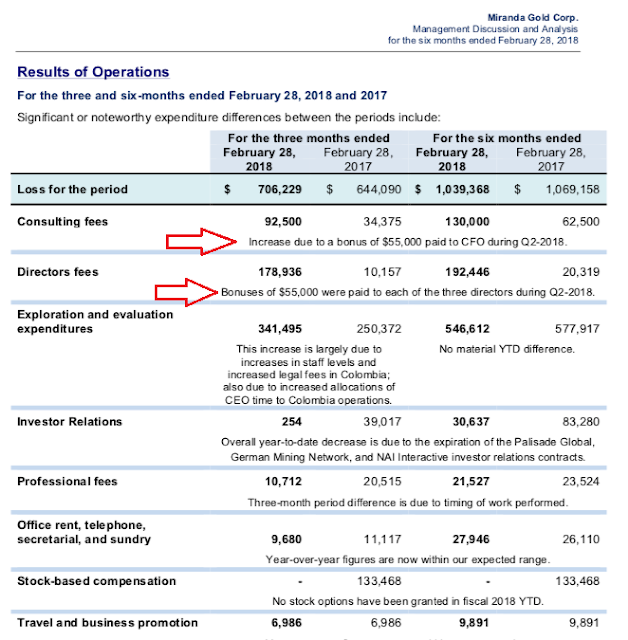 Three directors and one officer (the CFO) had been given one time, unscheduled and out-the-blue bonuses of $55,000 cash each. In other words, they’d been given the money by the company in order to buy the shares in the placement. It was the first time MAD.v had awarded bonuses to management too, this isn’t a regular occurrence and just happened to coincide with the raising.
Or in short, they’d awarded themselves 1m shares and 1m warrants for free. And sure enough, when the escrow came off those shares…

…the stock got blown to pieces by a whole bunch of people looking to cash in quickly.
These are the people you’re dealing with in explorecos, directors and managers who will screw their own company over and leave their shareholders holding large bags of paper, all for $25,000 cash in the hand. Lovely people.