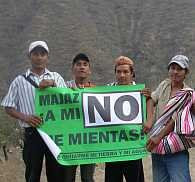 Surprise surprise. Thugs is as thugs do and all that stuff, the guy who dared to tell the truth about the torture suffered at the hands of Monterrico Metals is now getting death threats on his private cellular phone. Thanks to a headsup from the nice people at the Peruvian National Coordinator for Human Rights (gracias chicos), here below is their story put through the Ottotrans™, the original of which you can find here.

This story is not going away, Andrew Bristow, Richard Ralph and all the other corporate liars attached to MNA.L: You guys give the mining industry a bad name and thanks to the efforts of people like Julio Vasquez who are not cowed by threats you’ll never mine an ounce of Peru’s soil. The sooner you’re out of business the better.

Due to this serious allegation made by Vásquez Calle, the Ecumenical Foundation for Development and Peace (FEDEPAZ) manifests its concern for the risk that the life of said journalist faces.

Because of this, FEDEPAZ, the legal advisor of the journalist, has reported to diverse international organisms concerned with the protection of Human Rights in order that they intercede with the current national administration to offer necessary protection in light of the constant threats that put his life in danger.

At the same time, reports are being presented to the National Fiscal Office to demand an exhaustive investigation and to the Defender of the People’s Office (ombudsman) so that they, in compliance with their function, intercede with the relevant organisms in order to protect and safeguard his personal intergrity.

Finally, it should be mentioned that the Vásquez case is a repeated one, as local Piura authorities as well as the Defenders of Human Rights and Environment that have taken up the defence of the communities of Ayabaca and Huancabamba, amongst then members of FEDEPAZ, have also been victims of threats, surveillance, phone-tapping and unfounded accusations.