Monterrico Metals: How Peru’s Police and British miners use torture to control populations

Richard Ralph. An good example of colonial scum.
In early 2007 Monterrico Metals was taken over by Chinese metals company Zijin Mining Group. I want to say that first and foremost because this story is not about some dastardley story of Chinese suppression. In fact the Chinese of Zijin are fair corporate citizens that have suffered under the weight of the previous owners of Monterrico, the British. It’s also the story of how the Peruvian government betrays and lies to its own people in order to continue with its “growth at all costs” policies.

“The Brits, Otto?”, I hear you asking. Yep, the Brits. To prove that the British aren’t all the sporting fair play they’re cracked up to be, here comes a report on how they, along with Peru’s loving and caring National Police in cahoots with the Mining Ministry, treated Peruvian locals who protested against their mining development of Majaz (now re-named Rio Blanco) in 2005. These Brits also include the then British Ambassador to Peru, an ungodly shit named Richard Ralph who was later caught insider-trading Monterrico stock in 2007 and fined £117,691. In the press release about the insider deals there is this passage about Ralph;

“The fact that a British Ambassador working in Peru finishes by being a high executive in a mining company and using all his contacts demonstrates the low moral character of these people and is evidence as to how this type of company is managed.”

Indeed. So on to the main story. In August 2005, a group of locals claimed that they had been victims of violence and torture when they staged a pacific protest at the British-owned Monterrico’s project at Majaz. The company has always denied these claims, even when independent doctors reported in June 2008 that the locals were telling the truth and had clearly been tortured. But yesterday, January 9th 2009, a development occurred. The National Coordinator of Human Rights in Peru (serious people) published photos obtained of the illegal detention and torture of the group of indigenous. Below find the whole story (translated by me) and photos of what happened that look like something out of an improvised Guantanamo.

So read on, people. Remember that since being taken over by the Chinese, Monterrico has basically been a good corporate citizen in Peru. What you’re going to read is how a British mining company that includes a crooked ambassador to the country in question enjoys treating their South American hosts. And remember the whole trap was set up by the Peruvian Ministry of Energy and Mines that lied about a high level commission being set up for the locals and then set their police force attack dogs on the group. 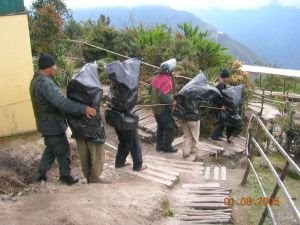 Since 2003 the mining company Majaz, today named Rio Blanco, operated in an irregular manner in the territory of the rural communities Segunda y Cajas and Yanta, in the northern frontier of Peru. The presence of the mining company is irregular as it did not have the consent of the two thirds majority of communal assembly as required by the law 26505, as noted by the People’s Defence ombudsman (report 001-2006/ASPMA-MA). For two years the communities affected tried to use channels of dialogue with the State to demand the respect of their territorial rights, without any success.

At the end of July 2005 the communities began a peaceful march towards the mining camp where, according to an offer from the Ministry of Energy and Mines, they were to meet with a high level multisectoral commission. The communities have noted on many occasions that it was a very difficult march, because it implied walking for several days through dense vegetation in extreme climatic conditions. 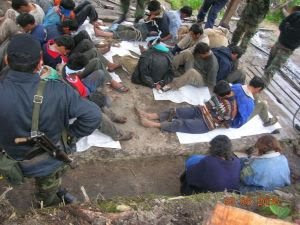 On arriving at the mining camp on August 1st 2005, the group was not received by the anticipated commission for dialogue, but instead a large police contingent that brutally repressed them, throwing tear gas canisters from helicopters and firing live rounds at the people, even when they were fleeing.

Under these circumstances 29 people, including two women and the journalist Julio Vázquez Calle, were apprehended and taken inside the mining camp. They were held there for three days and were submitted to various forms of psychological and physical torture. As well as being savagely beaten, in those three days they were kept blindfolded by bags sprinkled with tear-inducing powder and with their eyes bandaged. They were also deprived of warm clothing despite the low temperatures. 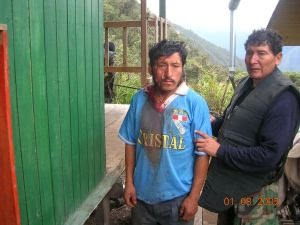 According to the testimonies of the group, from time to time a toxic powder was put on their faces under the bags and bandages that made them vomit and did not let them breathe properly. The women were subjected to diverse sexual assaults. Also, they were all inflicted with diverse verbal humiliations and threats.

In October 2007 the US institute ‘Physicians For Human Rights’ (recipients of the 1997 Nobel Peace Prize) performed examinations on eight of the tortured people and confirmed the abuses they had suffered during their illegal detention. 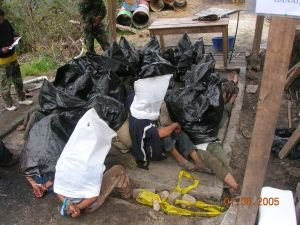 The report contained the charges of aggravated sequestration, tortures and crimes against the person. Among the methods of torture included in the report were aggression with tear gas, exposure to toxic substances, beatings, asphyxia, being kept bound in forced position for long periods of time, prolonged exposure to cold, denial of water and food, death threats etc.

Additionally, the procurator fiscal who was present during the group’s detention, Félix Toledo Leiva, has been charged with the crime of omission of exercise of penal action, as he was fully aware of the abuses committed and far from promoting penal action against the perpetrators he denounced the victims for their part in the peaceful march.

The doctor who examined the tortured people has also been charged with the crime of expedition of false medcal certificates, as he did not affirm the evidence of tortures presented to him. This report is the origin of investigation 214-2008 of the Penal Authorities of Piura (Quinta Fiscalía Provincial Penal de Piura). To date, the Public Ministry has been taking declarations from the victims.

The Photographs of the Horror
A few days ago, the National Coordinator of Human Rights in Peru was given access to a group of photographs, handed in anonymously, that corroborate the allegations of torture reported by the community group. 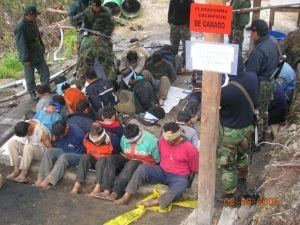 The photos shows diverse moments in the occurances in the Majaz mining camp. In the photos the belongings confiscated by the police including clothing, food and cooking equipment can be seen. Of course there are no armaments which accredits the peaceful character of the community’s march.

The images reveal, without a shadow of doubt, different signs of ill-treatment to the group that participated in the difficult march. Bloodied faces with contusions and haematomas product of repressive actions. People with no shoes and bare backs, herded together, bound and blindfolded in the interior of the mining camp.

The images also show how the group was kept with their heads covered by plastic bags that contained tear-inducing powder that as well as producing severe burns did not allow them to breathe (according to the testimony of the victims held under these conditions). In such circumstances they were transferred to different points inside the mining camp installations where they were held hostage.

The National Coordinator of Human Rights in Peru strongly condemns the acts of torture and abuse against the communities of Ayabaca and Huancabamba who appear undoubtedly accredited in the published photos. We invoke the authorities to rigorously sanction according to law the responsibles for these terrible acts.

The Death of Melanio 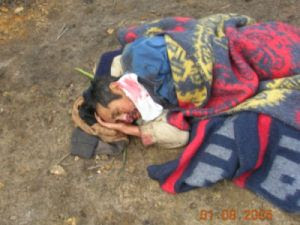 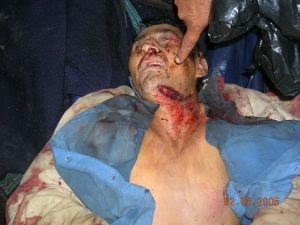 The circumstances of the death of the community member must be seriously investigated. Above all because the autopsy examination reported the death of Melanio García on August 2nd, product of a hemorrage cause by the bullet wound. And also becasue the photos taken on August 2nd register the body of Melanio, who on this date was in police custody, in another place and in a distinct position (lying back down on a sack). 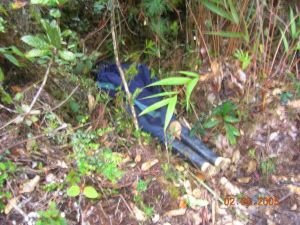 UPDATE: For more information on Majaz 2005 and the report from the medical team in 2008, click here and open the English language Word document second from the top.