I’ve had WTI front’n’centre on my worrylist radar for a few days now, which has been reflected in the sudden surge of posts about the stuff recently in what’s supposed to be a LatAm-y corner of cyberspace. But big deal…my blog, I’ll do what I want. 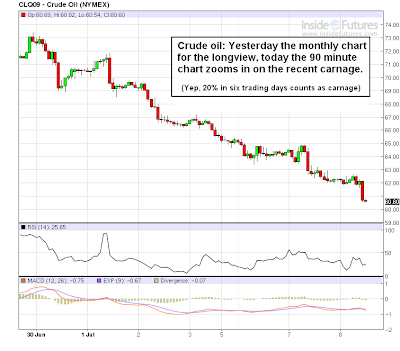 So today Paul Krugman looked at crude and posted this short but sweet article on his NYT blog. It’s worth reading, as even though he doesn’t come out and admit in a loud voice he was wrong about oil last year (he was…but hey, T. Boone Pickens and his windmills too…Goldman Sachs, too etc etc too) he makes a good point about the current dynamics and particularly the fact that the word “speculation” should NOT be demonized in the way it’s been suffering recently. Here’s an excerpt from the Krugman note (but make the effort and read the whole thing here; it’s not a long one):

Now, “speculation” isn’t a synonym for “bad”. If the underlying assumptions that seem to have been driving oil markets were right — namely, that a vigorous recovery is just around the corner, and demand will shoot up soon — then it would be perfectly reasonable to accumulate oil inventories right now. But those assumptions are looking less reasonable by the day.

I agree. The frictionless capital market has yet to be invented, which suits us little people as we search around for those wrinkles in value and try our hardest to take advantage of them. Right now oil is the theme, but it applies to most any part of the financial markets. So let the speculators speculate…after all, you buy a stock and you’re one of them and only time tells whether our judgments are right or wrong. Faites vos jeux, mesdames et messieurs…….