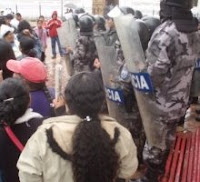 Here’s the link to a good report from Daniel Denvir in Upside Down World that chronicles some of the protests seen in Ecuador this week about the passage of the new mining law.

The report is biased towards the plight of the protestors and that’s all right by me, though to its credit does give the other side of the story further down the note. I’ve mentioned previously that Denvir does a good job reporting on Ecuador and that hasn’t changed. Do read for yourself about the reported police repressions that sounds pretty severe and make up your own mind. But most interesting is paragraph five that reports on the CONAIE national executive position. Here’s the extract:

After emergency meetings on January 7, the Confederation of Indigenous Nationalities of Ecuador (CONAIE) called for a national mobilization on January 20, calling the government “dictatorial.” It is unclear whether the January 20 mobilization will spread road blockades to other provinces in central and northern Ecuador. Protesters are demanding a dialogue with central government leaders and for a broad national discussion on mining before any legislation is passed.

As noted yesterday in this post, CONAIE is a smart, canny intelligent political animal. Note that it calls for its national mobilization on Janaury 20th, by which time the debate would have happened and the mining project voted into law. You telling me that CONAIE didn’t know that? Wanna buy that bridge of mine?

This law is going through.