Since we ran this post and chart on Friday, there have been two more opinion polls published in Peru by the decent end of the poll-o-sphere on the same subject: Who’s gonna win on April 10? Luckily for your author, El Comercio saves time by putting all three polls (Datum Friday, CPI Saturday, Ipsos/Apoyo Sunday) next to each other in this easy to read table: 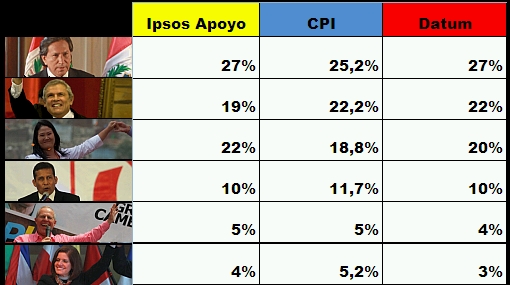 Conclusions? Yeah sure, we can do conclusions:

1) Toledo is clearly the frontrunner and the consistency of his numbers is noteworthy.
2) It’s between Keiko and Castañeda for the second spot in the run-off. This depends on how much Luis implodes rather than a new-found love for Keiko amongst undecided, as in Peru it’s love or hate as regards the name Fujimori
3) Ollanta isn’t getting into the fray. FWIW I caught a showing of a rally of his on TV late last night. He’s not a very good public speaker.
4) PPK is liked by people who make decisions and not by people that vote, so you see him getting lots of airtime and you see what-passes-for-highbrow columnists in Peruvian media making nice sounds about the guy. Meanwhile in the polls he’s getting nowhere.
5) APRA has really screwed its own roost and watching the Araoz campaign is akin to rubbernecking a car crash.

Oh yeah, nearly forgot. Here’s a combination of 1) dullard journalist asking the samo-samo questions to Pedro Pablo Kuczynski about kinda dubious links his alliance party has to dubious narcopeople in the shadows of country politics and 2) PPK’s famously short fuse. You don’t need to understand the question as the answer is what counts (and it comes in international-speak). Twenty-seven seconds of campaign fun.