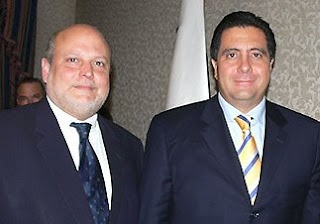 Richard Fifer (white stubble, invisible hair) posing with Mel Gibson…or is it
Noriega? Or Don Winner? Uff, I get confused….
Y’know, after fanfaring to the world that your gold mine was about to open and your gold mine was going to produce 100,000 ounces of gold in 2009 and your gold mine was wonderful and cheap and everything (and even getting local Reuters lapdog to regurgitate your BS for the wider world), you would have thought that it might drum up a bit of interest among the investment community.

Not at Petaquilla Minerals (PTQ.to). It may have something to do with the fact that the management are liars and the statement aboout PTQ.to having the necessary environmental permits is 100% false, misleading and fraudulent. It might have something to do with CEO Richard Fifer’s dubious past as a local politican now under embezzlement charges. It might have something to do with the total and utter rejection among locals of his mining project that is screwing up the quality of life in the area. Hell, it might be due to this humble blog getting the word out about these shady characters and their, “Pssst! Wanna buy a gold mine in Central America?” marketing techniques. But for one reason or another, the dreams that PTQ.to might have had of buyers queuing up to get a slice of their action has not materialized.

So what to do? Well, you can always prop up your own stock price by buying every single bid on any given day. For example, note that of the eight trades completed in PTQ.to on Monday 8th December, eight (i.e. all) of them had a certain Richard Fifer as the buyer (and note the cute little 500 share tape-painter at the end of the day….you go girl).

At least Fifer has the morals of a ship’s captain and has decided to go down with this sinker. Must be looking out (from the concessions picked up in 1986 and never developed in the last 21 years) to the Panama Canal that does it.