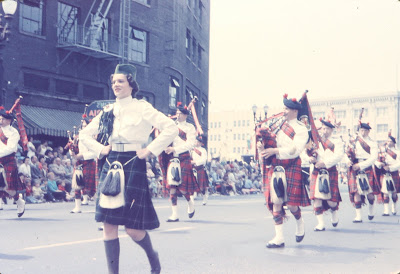 David’s father on the right
Some pretty impressive feedback from this kind of OT post on Sunday about Bill Millin, the D-Day bagpiper who has just passed on. Reader and subsciber “David” sent over the following and also kindly gave permission to share.

My father was the Pipe Major of the Clan McClay Bagpipe Band in Portland, Oregon until he died in 1974. Here the band is marching in the Rose Festival parade through downtown Portland around 1965. He was a B17 bomber pilot during the war from age 21 – 23. i was a piper from age 5 to 18. and studied piping briefly in Edinburgh where i was pursuing a degree in Philosophy – which lasted 3 months, at which time i took off for Asia, age 18.

I forwarded the story to my piper brother in Maine and he replied:

On Saturday I had a reed pop out of my chanter as we began to march onto a field and we were assaulted by hordes of midges, which landed on and died on our white shirts. Yet I kept on marching. Not quite the same as what Millin had to endure, I know.

My chanter reed is from 1965. When Dad was pipe major. I look at my reeds like single malt whiskey. They get better with age.

We all have had such interesting lives.

Then when asked if I could share with a wider audience, David wrote:

it’s an honor.
i used to play every tune mentioned in the article taught to young Davie by his dad on the back porch. His pipe band would practice every Tuesday evening in the field next to our house – in the summer i would climb high in the cherry tree and be in heaven.

People, this blog is a never-ending source of wonderful surprises to its author.