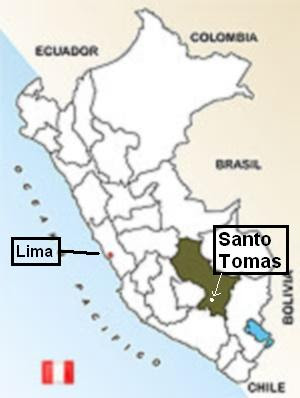 This time in the town of Santo Tomas in the Chumbavilcas region of the Cusco. Sad to say it’s just another version of the same old story.

1) A strike/protest by locals started on June 24th. Nobody cared. Nobody listened.

2) All roads into and out of the region centre, Santo Tomas, have been blocked for a week. The local mayor has said that the town has run out of provisions. Still nobody cared. Not in The Republic of Lima, y’see.

3) A bus tried to get through one of the blockades this afternoon. When he couldn’t get through he walked to the police station to get help.

4) When the police arrived on the scene, according to this report in the good regional newspaper El Sol del Cusco about 40 protestors starting throwing stones at the officers and the bus, breaking windows etc.

5) Police retaliated, with one officer firing his gun “at point blank range” into the crowd of protestors. The shot hit a certain Remigio Mendoza Ancalla in the head. He later died in hospital.

6) The mob turned furious after the shooting and attacked the police officers. There are 20 injuries from the fight, inclusing one seriously injured police officer. 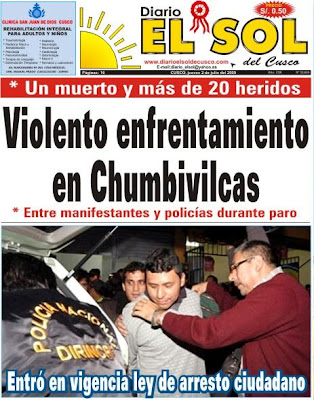