Since the news yesterday that Muddy Waters (Carson Block) is shorting Asanko Gold (AKG) there has been much ink spilled on the news, for against and whatever. But one thing that got me thinking was the last recent headliner mining short and how it compares to this one. Remember back on February 14th when Kerrisdale Capital unveiled its short position on Northern Dynasty? Back at the time, NAK was a $3.20 stock and it’s now half of that, so Kerrisdale have done well with their position (assuming they haven’t covered already of course) but what we can note in hindsight is that Muddy Waters didn’t join in on the short (which would have been perfectly feasible, these shorties tend to hunt in packs). And hindsight includes the fact that Muddy Waters is obviously interested in the mining space and in the opportunities to short in the Canadian cap mkts (they said exactly that on BNN yesterday).
So why didn’t Muddy Waters join in the NAK short but went for Asanko instead? This is why: 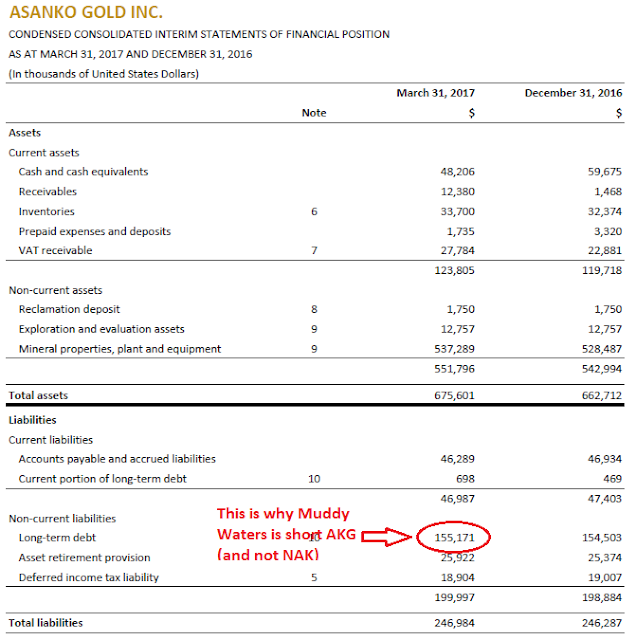 AKG makes no money on operations. Neither does NAK of course, being an exploreco, but what NAK doesn’t have is $155m of financial debt on its books that needs payback as from July 2018 in ten happy tranches (of about $16.2m each on average once the 7% floor interest is considered). Both NAK and AKG are mediocre companies, only one of them is in real financial trouble. The Kerrisdale short on NAK worked as far as it went, but NAK will be able to spin out its story for years on end (because those self-servers at NDI HDI are like that) and the stock isn’t going to zero. AKG, on the other hand, is correctly identified by Muddy Waters with the real potential to go to zero. That’s what debt does to you. Ask Great Basin Gold.