My how times change 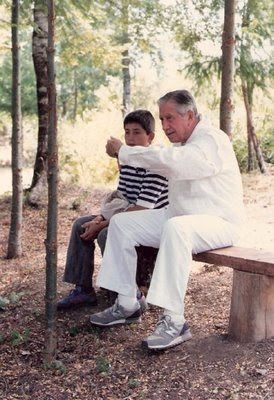 Portrait of the fascist as a young man
The younger bundle of fun pictured above is a Chilean named Rodrigo García Pinochet, grandson of the older dude in the photo who you might recognize. Yeah that’s right, the one who took over his country, put a bullet through the head of its elected president and then proceeded to rid the country of those troublesome lefties in the most efficient manner he knew. I mean, no point paying for prison cells when there are unmarked mass graves as an alternative, eh? In the name of democracy, of course.

Anyway, I digress. Mini-Pin8, this Rodrigo dude, is all upset and bothered because he’s all grown up now and wants to carry on the family tradition of …..errrr…democracy?..…but his far-right wing political party won’t let him stand as a candidate for Chile’s parliament in the upcoming elections. Rodrigo said yesterday:

“I have no doubt that if my grandfather were alive (the party) would be giving me all its support.”

Well yeah, Roddy. I think that’s the whole point. They don’t feel like the next possible murder victim these days so they can say what they really think, not just piss their pants and cave in to pieces of shit like you and your family. Even the far-righties are eschewing Pinochet these days….damn, there is hope for the future.