Canada is my new hero country….wild no?

My stereotype-ingrained-pigeonholed opinion about Canada being a quiet, relaxed, unassuming, uncontroversial, agreeable…and plain boring country has been blown out the water by those sneaky conniving Canuck types and their Machiavellian political plotting. YAY!

“So what they gone done, Otto?” I hear you cry. Well, remember back to this photo-op on November 21st? 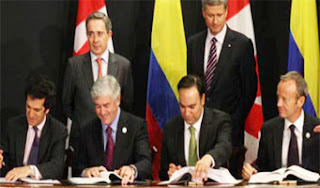 That Harper dude stood next to Alvaro Uribe of Colombia and watched the lackeys sign the Free Trade Agreement (FTA) between the two countries. Old Alvaro was pleased as punch, of course, and called upon the USA to get on and sign their own FTA with his country and stop moaning and whining about petty things like gov’t sponsored paramilitary death squads, phone tappings, kidnappings, extrajudical murders carried out with the approval of ministers…y’know, trifles like that.

But then on April 28th Canada’s parliament debated and decided on a few other things. Then yesterday via a press conference in Colombia, Canada delivered a very, but VERY large portion of egg to the face of Uribe when it emerged via a pro-Uribe senator that “a few extra details” must be taken into consideration before the FTA could be ratified. Including:

Oh how I ROFLed when I read that one. Y’see Prez Uribe classes Human Rights dudes in Colombia as the mouthpieces of terrorists, refuses even the most recognized organizations their permits, chases their personnel out of the country and drowns out their reports of institutionalized killings (there are 22,000 people being investigated in as disappeared in Colombia right now….and no that’s not a typo…..twenty-two thousand) by unending ad-hom attacks on the people delivering the message.

And now Canada says “Dude…you don’t get your FTA if you don’t STFU”…wonderful. What a bunch of subversive bastards you are, frosties. Ah loves you all.