Rumours and rumbles about Nestor Kirchner’s health have been doing the rounds for as long as this observer can remember. Since at least 2004 (and maybe before) talk of bowel and/or colon cancer in particular has done the rounds from time to time. There is a whole network of supposedly well-founded gossip (that never seems to get anyone on record, though) which has the 58 year old Neshtor visiting a specialist clinic in Rosario, Argentina, has him on special vegetable-only diets and even has him collapsing in the Olivos Presidential residence. Plenty of variations of these themes have been heard by your tuned-in Otto, too.
It’s one of those urban legend rumour things that is part of the fabric down here. It’s never occurred to this humble scribe to mention the issue because it’s a bit of a cheap shot, really. It’s too normal for bitchy K detractors to go after Neshtor this way and there’s not much the guy can do to defend himself on the issue. But when I saw this photo today of Neshtor going to pay his respects to local BsAs Peronist stalwart politico Manuel Quindimil who passed on Friday…. 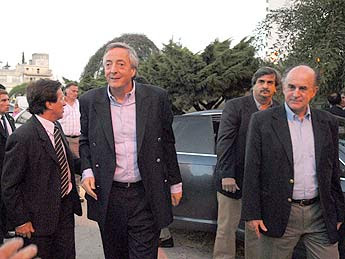 ….the phrase that sprang to mind was “That dude is unwell.” So I checked back at previous years photos of Argentina’s ex-President. This below is Neshtor in 2005…. 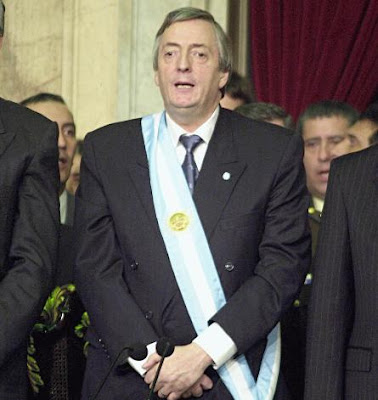 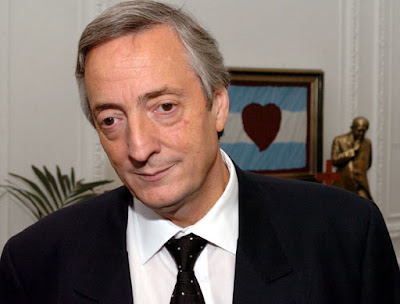 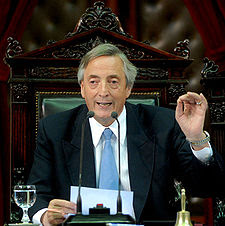 I’ve tried to be fair with these examples, rejecting photos that are either too modeled or too informal, just attempting to get an honest shot of the guy in the years in question. The bottom line is that he suddenly looks 15 years older. Correct me if I’m wrong cos I’d like to be, but my next door neighbour is 79 (just asked him this morning) and looks in far better shape.

Is the health of Nestor Kirchner truly newsworthy and worth mentioning here? Well, yes it is. It’s not just gossip and snark, not while he’s the President of the PJ (Peronist) party, he tries (and fails) to get the top job at the newly formed regional Unasur body and he continues to be the undisputed driving force behind Argentine governmental politics. It’s also notable how his eldest son Maximo is suddenly making noises inside the party and trying to secure a powerbase in his local structure; the thought of him doing that without Nestor’s help is just too silly to imagine. Thoughts of setting up his lasting dynasty before it’s too late, perhaps.