Nevada Copper (NCU.to), its tunnel, its treasury (from IKN299)

This was a piece on NCU.to that formed one part of IKN299 last Sunday. With NCU.to now rising on the back of the copper pop this morning, it’s starting to look seriously tempting as a short.
xxxxxxxxxxxxxxxxxxxxxxxxxxxxxxxxxxxxxxxxxxxxxxxxxxxxxxxxxxxxxxxxxxxxxxxxxxxxxxxxxxxxxxxxx
Nevada Copper
(NCU.to): An update
on that (in)famous shaft sinking effort that NCU needs to complete in order to
get its stage one operation going. As at January 7th 2015 (company
filing of its latest presentation (9)) the tunnel was at 1,655 feet and
advancing, and I quote, “5 to 7 feet per day, depending on ground conditions”.
The last time we checked in on this subject was IKN295 and in
that edition, we noted that the tunnel was reported by the company at depth, with
another
to be tunnelled before the job was done. At that time we noted the rate of
advancement was well below the “5 to per day” the company claimed. With the
new numbers we can check up on progress.
Once again, the reality doesn’t match up to the claims made
by NCU. And even if we’re generous and cut a week out of the time for the
Christmas/New Year period the resulting 36 days is an average of 3.75 feet per
day, well short of the 5 to 7 feet in the glossy brochures.
But the future is what concerns us most and we know that
from January 7th, NCU has 445 feet left to tunnel in order to reach
the mineralization and complete the shaft. Here come the calculations:
Back in the more detailed
analysis of IKN295 we noted that NCU’s cash treasury, even after its recent
refinancing with Red Kite, was scheduled to be dry by April 2015. That means at
the very least it needs to get this tunnel done by the end of March and even
then (here’s a chunk of the IKN295 text)…
“…there’s the little matter of the $24.3m they have earmarked a the bill
for the production equipment they need for the underground operation. Your
author understands from good authority that NCU hasn’t spent a dime on that as
yet, so it will need to fund the purchases some way.
…so even with the tunnel
done it’s by no means out of the woods. But getting the tunnel complete before
the company runs out of ready cash is now an absolute minimum requirement for
the company (and please note,
importantly, that when the company gets to the 1,906 feet mark and digs no
deeper it’s going to give you a fanfare NR for sure, but it will still need to
tunnel nearly 200 feet before the project is complete) and the way things
are going, well, let’s give them the benefit of the doubt but even so it’s nip
and tuck here. And it remains to be seen how NCU plans to pay for the machinery
it needs.
There’s a difference here
between NCU the company and NCU the stock. The company has large insto support
from Pala and from Red Kite, so it’s unlikely to be denied those last few
millions it will need to buy machines, go into production and produce real
fanfare NRs come the time. But how it gets that money is another story and
there’s a pattern of cash raising here that is squeezing equities out of the
picture. Pala is of course a big holder of NCU stock, but the last time the
company tapped its backer the money came not in the form of another equity
raise but two small bridging loans, both with sizeable interest rates and
specific payback criteria. Then Red Kite, which is all about debt financing and
not about holding shares or warrants. NCU is collecting debt on its balance
sheet and come March or April, if we see another debt deal to secure machinery
financing, in the current price climate for copper those holding shares should
look out below.  And as for M&A,
nobody but nobody is going to buy this thing, not with all that debt on board
and a long road before positive free cash flow. All that aside from the dubious
quality of the asset, particularly the marginal economics of the larger stage
two operation.
Being a Canadian-listed
company makes it difficult for the retail player, but all the same and even
with the PPS drop seen in January NCU is an obvious short here. Its share price
could end up in the pennies. Or in another way, the standard model mining stock…errr…“flow”
chart: 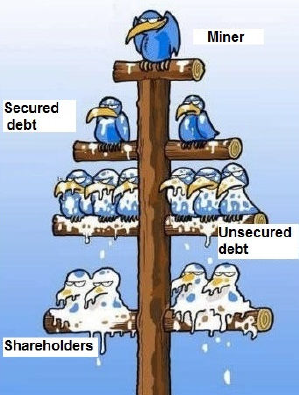