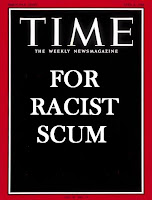 An incredibly racist, nauseating piece shows up in Time Magazine today. The rag, its editors and anyone paying money to read this note should be ashamed of any connection to Joel Stein.

The openly Gay Community in Bolivia is braver than most, as the country is still backwards when it comes to sexual emancipation (and not helped by its President’s wisecracks about chicken hormones, even if he apologized afterwards and explained it was meant in jest). Bolivia Weekly reports on the La Paz/El Alto Gay Pride parade last weekend in the city and the issues facing its members. Clearly some progress is being made (the parade was well supported and successful) but there’s a way to go before Bolivia joins the more enlightened regional countries on LGBT rights.

The Unbearable Lightness of Being a Fund Manager. It turns out that the best performing fund manager over the last 30 years has held more cash than anything else! What the hell do you pay these people for, foolish investorperson?

So apparently, Uribe has been tapping Correa’s phone lines. The headline-grabbing part of this scandalette smacks of BS to me, but the chances that DAS has been operating in Quito are more than high. Note the timing, folks, what with Studmuffin wanting to be invited to watch Santos get the sash.

Chile’s futbol team will receive a hero’s welcome when arriving back home, because they played to the best of their ability and showed great game. England’s team decided to schedule their return at 06:20am this morning London time to avoid such hero’s welcomes.

Tim Dees said… I live in Edison. It’s a nice little suburb, and the Indians make it a really cool, unique place.

UPDATE 2: Seems Joel has pissed a lot of people off with his bigotry. The WSJ picks up the story, notes the protests and even reports that Time International, the sister publication to Time Magazine, has refused to publish Stein’s story in its edition.