News Roundup (rummaging around, seeing what’s been thrown out and recycling) 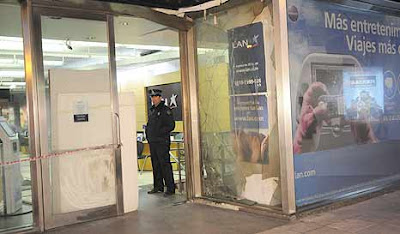 Ka-Boom
In Argentina last night, some dude wearing a hood left a bag outside the LAN Chile airline office which exploded four minutes later. No injuries but plenty of broken glass to clean up this morning. Poor old Chile…nobody likes ’em.

In Ecuador, this time next week a eport from the government media people is set to crack down on 34 radio and TV stations (out of 195 they found operating illegally). Correa says that some ‘sacred cows’ will have to close. English media have gone waaaay over the top about “state grabbing media” and freedom of speech stuff, so for a more balanced report check out this El Telegrafo report in Spanish language that tells it how it is. All the same, expect a bunch of white-handed students to march through Guayaquil.

Peru saw a nasty Sendero terrorist attack in which three police and two family members were killed. Not good at all.