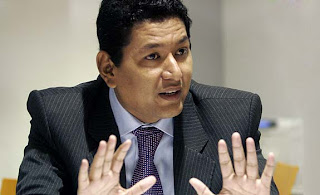 Miguel Angel: Enjoy your stay, send us a postcard
c
Chávez unilaterally changes his mind about his role as president and announces he’s staying in charge until 2014*
Uruguay 2q10 GDP growth 10.4%, while inflation is targetted at less than 7%. Both those numbers are high.
Venezuela has 251 billion barrels of oil as official reserves, placing the country second in reserve count behind Saudi Arabia. This has nothing to do with any sort of political friction between Venezuela and the countries that it supplies, of course.
Peru’s Lourdes Flores, joint leader with Susana Villaran in the tight race for Mayor of Lima in the October 3rd election, says she “doesn’t care less” about the job, but that subdued link above in English doesn’t mention that she also said they could “stick the Mayor’s job up their ass(es), what do I care about being Mayor” or that her election advisor tried to change the results of an opinion poll by talking with the head of the polling company. The conversations were recorded on an illegal wiretrap and Peru cares more about the illegal means of the recording than what Flores said. Strange country.
Colombia: Miguel Angel Rangel Sosa, ex congressman for the Bolivar region of Colombia (Uribe era, surprise surprise) was today sentenced to seven years in jail for collaborating with and promoting the illegal ultra right wing paramilitary groups in his region, responsible for mass killings, extorsion and other forms of very nastiness including calling on the paras to kill a witness who was accusing him of said corruption. This one is unlikely to feature in your evening news show tonight.
*who did you think I was talking about?