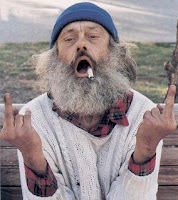 Piñera finished the lunch feeling worse for wear
Robert Funk gives us the lowdown on prez Piñera’s lunch date with Chile’s academic glitterati yesterday. We find out that Seb is an occasional smoker (it’s Chile…no big deal) and that Funk is still wondering what it was all about.

Bloomie got the scary copper quote for yaz. “The copper market will be “volatile” for as much as another year after China took measures to cool its property market, Codelco Chief Executive Officer Diego Hernandez said yesterday in an interview at Bloomberg headquarters in New York. The Asian nation is a “risk to the world’s market place in the near term,” Freeport CEO Richard Adkerson said in an interview.”. plenty more spookiness over at the link.

Structurally Maladjusted got the ECLAC, links to the brand new 290 page (!) report from LatAm’s trusted source for numbers’n’stuff entitled “Time For Equality” and then, for those of us too lazy to read the UN sponsored thing, explains a bit about what’s inside. This is, in fact, required reading for LatAm wonks of all flavours. SM is a part of my webpipes life and should be on your RSS by now, too.

Grit and Grace has a great post on the real, homicidal dangers of sexism in LatAm. Here’s the same extract that Tim used in his headsup post on this really good article.

These attitudes have a source. Whether spit from the mouths of fearful neighbors or from the pulpit in a twisted religious interpretation, these attitudes are called machismo, and one of El Salvador’s big struggles (like most countries in the world) is how to finally shed sex discrimination. This discrimination can be propogated by societal structures, authorities, teachers, parents, etc, and it finds its extreme expression in violence against or the assasination of women, called feminicide. In El Salvador, sexism is so ingrained that the band of men found it completely acceptable to rape multiple women and girls in their own community, in the middle of the day, and not fear retribution. Their male and female family members felt that the Las Melidas team was in the wrong, and that their grandfathers, husbands and sons had done nothing unusual. In short: in this case in the Lower Lempa, Salvadoran “masculinity” was valued over the innocence of childhood. Clearly, it will take a concerted and well-coordinated effort to change this reality.

Sobering, informative and a jolt to the senses. Go read the whole thing.