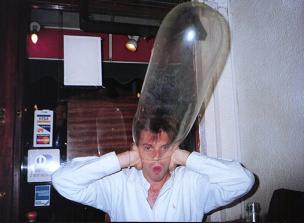 ‘Chelle Bachelet causes shock horror headlines in Spain’s El Pais and Argentine media for having dared tell the truth back when she was Chile’s Prez. According to the latest round of wikileaks, she said, “Argentina has credibility problems as a country. Its democracy isn’t robust and its institutions are not strong. It tends to live from crisis to crisis instead of persuing stable policies.” Outside of the huff’n’puff patriotic brigades you won’t hear many arguing with that one.
Argentina says today it will pay off its Paris Club debt to the tune of $9Bn. If you think you’ve heard something like this before, that’s because you have, In 2008, in 2009 and in 2010 in fact. See paragraph above concerning ‘Chelle for more details.
You know when a State news agency is talking utter utter utter bullshit when it starts an article with something like, “Peru is the number four Latin American country for investment in technology” and then goes through the whole of the report only quoting percentage increases and no hard numbers. Your humble scribe’s time spent in the 1980’s reading the USSR’s Pravda (English version) still comes in handy after all these years.

Prez Rafa Correa sez this about trade agreements between Ecuador and the big boys: “We will never sign a Free Trade Agreement (FTZ) with The USA or with the European Union” and that’s NEVER, because there’d be much more cost then benefit in such agreements. Sez Rafa.

Just about the biggest two week party in Peru kicks off this weekend as the Titicaca town of Puno holds its annual Virgen de la Candelaria festival. To make people don’t regret the hard partying too much afterwards, Peru health people are distributing 100,000 free condoms to revellers to combat unwanted pregnancies and the spread of HIV/AIDS. Just goes to show that in some things, Peru is far smarter than the its anally retentive Andean neighbours.