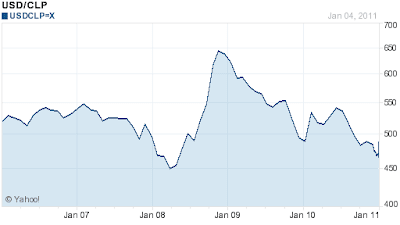 Chile’s Peso (CLP) continues its weakening this morning after the whopping great big U$12Bn CenBank forex attack announced yesterday. Now at U$1 = CLP494, it might have a bit more to run too by looking at the five year chart (above). Chilean wine/grape/apple/etc exporters happy.
In other Chile news, country FinMin Larrain pitches 2010 growth at 5.1% and 2011 growth forecast at 6.1%.
A chunky political scandal breaks in Peru. How much does it cost in bribes to become a Vice-President of Peru? 700,000 soles (U$250,000) apparently, as that’s the amount Carmen Acuña agreed to pay the campaign of frontrunning candidate Luis Castañeda for the post, according to the phone conversation secretly recorded then published yesterday in local media. A big big selection of Spanish language reports on the scandal and the fallout at Google here, an EngLang background to the case from Reuters here (btw, reuters calls the 500,000 soles donation but misses out on the 200,000 soles “campaign expenses” Carmen also said she’d pay). This one is likely to dent Castañeda’s polling numbers, as the dude already has the smell of corruption around him from the Communicore case. Banana Republic is as Banana Republic does, no matter what sort of growth miracle BS you want to dress it up in.
The C.A.P. funeral soap opera is frankly embarrassing and a window into the small-mindedness of all concerned. It’s getting so bizarre that Miami New Times, an anti-Chávez Dade rag, starts this piece on the saga thusly: “​We have taken our fair share of shots at Hugo Chavez over the years. But in the tug-of-war over the remains of former Venezuelan president Carlos Andres Perez, Chavez has somehow come across as a veritable voice of reason.”