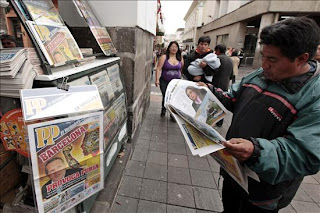 Hemispheric Brief calls the ruling ‘fascinating’ and this humble corner of cyberspace agrees. Costa Rica now makes internet access a fundamental human right. Gotta love the ticos.
Studmuffin won’t have to complain about the editorial line in this paper, methinks. Ecuador’s government this week launched its own pro-party daily called “PP El Verdadero” (the ‘true thing’ or the ‘reality’ I suppose, tough to nail the translation in context) a tabloid-style paper that appeals to the masses and will be according to the publishers, “.…a different newspaper, with optimism, positivity, hope, where we analyze issues from a humanist point of view“. He also says that the paper won’t be a simple gov’t mouthpiece. Yeah right.
Mo’ Ecuador with Correa in Korea. After hosting Bolivia’s Evo just a few days ago, South Korea rolls out the red carpet for the Muffin Man who’s touring the factories and seeing what Seoul could do for Ecuador’s growth profile. Thusly South America continues to divert its eyes from the North and look to the other side of the Pacific….and the USA still thinks it’s in charge. Rude awakenings in the pipeline, gringos.
Yesterday’s sickest joke? President Twobreakfasts is going to declare Peru free of illiteracy in 2011, which is the kind of thing that could only be said by a moron who cares much more about image than actually getting out there and doing something constructive for his country. There is no way this can be true, just ask anyone in the field who understands the reality of the situation. But it doesn’t stop the bullshit from spewing out his face.
And to wrap up, this humble corner of cyberspace would like to declare that it doesn’t give a shit what Fidel thinks of Cuba’s economic model or what Hillary thinks of Mexico’10 vs Colombia’90. Both issues are LatAm-For-Gringos fodder only.