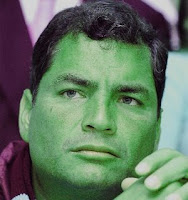 Any loophole will do.

Let’s face it, an NGO that goes by the name of “Accion Ecologica” (AE) (Ecological Action) isn’t likely to be mainly fighting for health causes in the first place, is it? But that’s the way it was registered with the Government of Ecuador…until today that is. The Ministry of Health this week revoked AE’s licence to work inside Ecuador because, according to Health Minister Caroline Chang, “it was not working in the field of health but in that of the environment.”

AE is one of nine NGOs that have been suspended from its registration with the Health Ministry in the last twelve months for the same “not health workers” reasons (six last year, three this month), so there must have been a good reason why these NGOs used the Health Ministy to get their permits. Some kind of easy paperwork or loophole, probably. But AE is certainly the highest profile NGO to have had their permits suspended. It’s been front’n’centre in the social protests against the now-active mining laws and is part of the group that Correa railed against when he repeatedly spoke of ecological extremists last year.

And now it is no more in Ecuador, at the same time as the new mining law goes active and President Studmuffin is romancing Canadian bizpeople investments in his country. Strange coincidence that, innit? Of course, HealthMin Chang said that,“there is no interest in prejudicing any organization, including Accion Ecologica. Because of this its NGO file has been sent to the Environment Ministry and that Ministry will approve its people” but if you can’t smell the BS eminating from that statement you need to take a couple more of those cold cure tablets you’ve been on recently.

Your humble correspondent, for one, knows just how long paperwork can take to get through a LatAm government ministry, especially when it suits them to “make absolutely sure that all the papers are in order”. I get the feeling that AE is about to find out all about this lack of dynamism in the next few days…or weeks…or maybe months….