It gets boring watching these obvious, 100% bullshit scams pop up like fetid toadstools and in the end the best advice we can possibly offer is that if a company is a junior exploration miner that’s quoted only on the US OTC market, it’s almost certainly a scam, but to illustrate the point let’s note the recent move in North Springs Resources (NSRS.ob) as it’s showing the classic modus operandi of the scumball-driven scam vehicle.
I could go on and on. And let’s note the last couple of days in NSRS.ob share price action, because its current 32c share price gives the stock a silly market cap of $222m (in fact it’s worth less than nothing), sees the price closing in on double that of yesterday morning and in the process has traded over 100m shares, 99.9% of which are certainly bullshit swaps from one hand of the scamrunners to the others as they wait for the suckers to turn up and feed their beast. 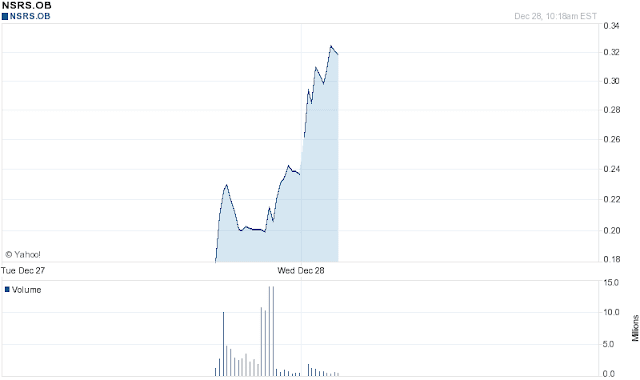 On a scale of one to stupid, you score stupid if you even consider getting involved with scams like this. They are built for suckers and so don’t be one…just avoid this crap and true pieces of market shit like Harry Lappa. And as mentioned above, this advice goes for all OTC-only mining stocks. This IKN public service announcement is now over, have a nice day.

UPDATE: The moment this post was published marked the day’s high price in NSRS.ob, with the stock now (about 45 minutes later) trading at 28c. Almost certainly a coincidence….

disclosure: no position of any sort in this worthless junk and it’ll definitely stay that way.