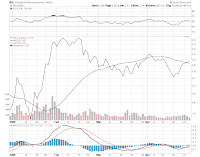 Ok, no Nadagold or Rick! Van Alphabet jokes here for a second. It’s time to seriously question this company and examine the short case for Novagold (NG) (NG.to). To do that we need to check out the circumstances of its three main projects, Rock Creek, Donlin Creek and Galore Creek.

Rock Creek: Supposedly opened last year but soon closed down and has remained shut. Violated environmental regulations and got into trouble with the authorities. Bad atmosphere and community relations with the people of Nome, Alaska. NG has no plans to re-open Rock Creek and has made noises about selling the asset. The Rock Creek debacle demonstrates that this company is inept and incapable of running a goldmine.

We should also remember the very shady and underhand insider selling that went on late last year. For sure Rick Van Nieuwenhuyse and Greg Johnson can claim they were forced to sell by margin calls once the financial woes were made public. However Johnson started systematically selling his stock way before any margin pressure could have been put on him. He started selling stock at the very same time as Rock Creek’s “production” ran into serious problems…almost to the day, in fact. He also started selling his stock the very same day that Wellington West recommended NG as a buy with a 75% upside price target.

So thanks to its Rock Creek operation we have evidence at Novagold of managerial and mining incompetance, poor social and community relations and shady inside dealings.

Donlin Creek: The 43-101 compliant feasibility report announced two days ago was woeful. And this isn’t just my view, as Ron Coll of Jennings called the numbers “atrocious”. Novagold will push the absolute amount of gold at Donlin but it cannot and will never make up for the fact that the study calls for $4.5BN in capex, $803m in sustaining capital and then, after all that cash, can only promise a meagre 10% IRR if gold manages to get to and stay at $1,000/oz. That in layman’s terms is a lot of buck for not much bang, trust me.

Then yesterday we heard JV partners Barrick (ABX) telling us that Donlin Creek was way down the list of its priorities. So let’s put this as simply as possible: Unless gold goes to and stays at $1,500/oz, Donlin will never be a mine. Never. Not now not ever, it really is that simple.

Galore Creek: Finally we get to Galore Creek, a JV with Teck. As everyone in the mining business knows, Teck is going through a whole house of pain right now as it scrambles to make payment on the bridge loan it took out to pay for a whole heap of coal it wanted to buy (aka Fording). And as Teck is at heart an industrials mining company it’s selling off all the non core PM asset that it can. There’s very little chance that Teck will do more than the strict minimum at Galore to keep its share, something the market and NG has already acknowledged. Galore is another project along the lines of Donlin, and we already know that capex projection at Galore turned out to be shockingly high. Also, it has been examined and dropped and examined and dropped by several different mining company for decades on end and has never become a mine. This in itself is a wake-up call.

Company Struture: To cap this all off, the company reported having cash of $78m and working cap of $62m on February 28th and a burn rate of $100,000 per day once one-time charges are backed out. If that burn has kept on burning we’ll be down to $56m in working capital by now.

However the market prices NG at a touch under $500m. So in the strange world that is Novagold, $56m + two unworkable projects + one for sale booked as a $110m asset= $500m. Even if we’re as generous as can be, say NG has $80m cash right now and ignore any debt on board, we’re assuming $300m for Donlin and Galore combined. To give you more colour here, Scotia this morning (Apr 30th) reduced the NPV of Donlin to zero. Also, Teck announced today it was continuing with its fire sale of assets by selling its Pogo project to Sumitomo. You seriously believe they’re going to move forward a marginal project like Galore under present circumstances? Wanna buy a bridge?

Bottom line at NG: Inept management + bad assets + high burn rate+ rapidly declining cash pile = NG is a seriously overpriced stock. It’s currently being held up where it is by a group of people in serious financial denial. That will change.

UPDATE: Oh look who’s selling his stock again...just days before that Donlin 43-101, too. Lordy, this mgmt stinks to high heaven.