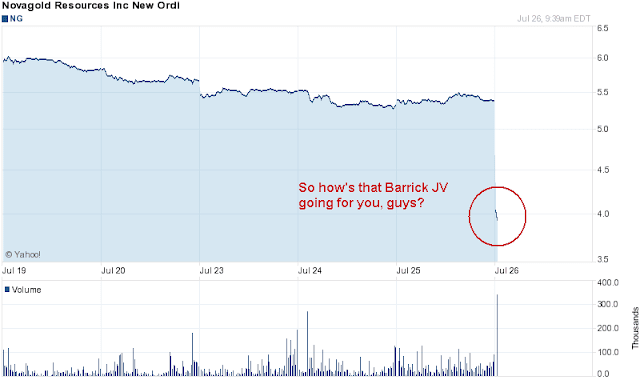 UPDATE 2: We remind readers of the Ottotrans™ number 44, dated September 7th 2011, on Donlin Creek. Read the NadaGold real NR over there, here’s the Ottotrans™ again:

Press Release Source: NovaGold Resources Inc. On Wednesday September 7, 2011, 8:30 am
VANCOUVER, BRITISH COLUMBIA–(Marketwire -09/07/11)- NovaGold Resources Inc. (TSX: NG.TO – News)(AMEX: NG.TO – News) The feasibility study completed on the Donlin Gold Project (formerly Donlin Creek) in 2009 is being updated to include power generation utilizing natural gas delivered to site via a proposed 500-kilometer natural gas pipeline from the Cook Inlet to the mine site. Utilizing natural gas is expected to lower costs to generate power and reduce operating risk. In connection with this update, Donlin Gold LLC, owned equally by wholly owned subsidiaries of NovaGold Resources Inc. (“NovaGold”) and Barrick Gold Corporation (“Barrick”), has provided its owners with preliminary capital cost estimates of approximately holy shit you gotta be joking me Rick US$6billion….you’re serious, dude? for the Project with an additional approximately US$1 billion for the natural gas pipeline…oh, just another billion thrown in there, don’t worry about it. The previous capital cost estimate for the Project released in April 2009 was US$4.5 billion and did not include a natural gas pipeline. NovaGold was advised by Barrick that it will also discuss these preliminary capital costs estimates for the Donlin Gold Project at its Investor Day taking place today in Toronto, Canada.

“Since April 2009 the price of gold has more than doubled, so for fuck’s sake stop looking at that seven billion dollar capex number, willyaz?” commented Rick Van Nieuwenhuyse, NovaGold’s President and CEO. “We are encouraged by these developments because that’s what we have to say to look good in front of the mining knownothings in New York that we’ve strung along so far and we hope that they fall for our bullshit again this time.”

Donlin Gold has advised its owners that this capital estimate is preliminary in nature with significant review and coordinating work remaining to be completed before the estimate is eventually doubled in the manifold studies that will be done before anything close to a build decision is made, perhaps around 2025. Such work includes, among other activities, hitting rocks with hammers, drinking copious amounts of alcohol in the evenings and sitting around wondering just why we’re still taken seriously as a gold exploration junior, what with a combined capex of over $12Bn for our two main projects….I mean, what’s 20% of the market cap of Barrick between friends anyway?

It is anticipated that the feasibility study update, including a revised National Instrument 43-101 compliant technical report by AMEC will be completed before the end of 2011. The feasibility study update will include the finalized capital cost estimates whatever that means, because we say finalized to make it sound all certain then throw in estimates to cover our asses with the reality of thing, updated operating costs, reflecting lower power costs and higher diesel, labour and other costs relative to the previous study, and revised economics based on these and other reviewed technical inputs which sounds all important, doesn’t it? The revised economics will be based on current long-term forecasted gold prices which have risen significantly compared to US$900 per ounce of gold that was used in the 2009 feasibility study, but we haven’t decided which number to guess at yet. NovaGold will announce details and results of the updated feasibility study when available.

The Donlin Gold Project is one of the world’s largest undeveloped gold projects and will almost certainly stay that way until the cows come home with proven and probable mineral reserves of 33.6 million ounces, measured and indicated mineral resources of 4.3 million ounces and inferred mineral resources of 4.4 million ounces, all of which worth precisely nothing until they can be dug out the ground so quit it with all those in-situ valuation comparatives will you please, dumbass anal ysts? The updated feasibility study will contain revised mineral reserve and resource estimates. The Project is anticipated to be capable of producing over one million ounces of gold per year for over 25 years with significant additional exploration targets identified on an eight-kilometer mineralized trend. The Partners expect to formally initiate permitting for the Project early in 2012.
The technical information contained in this press release was reviewed by Kevin Francis, SME Registered Member, VP, Resources for NovaGold and a Qualified Person as defined by NI 43-101.

UPDATE 3: Oh this gets better and better. Here’s the NadaGold (NG) (NG.to) NR out minutes ago to address the Barrick snafu and here’s a piccy to go with it. 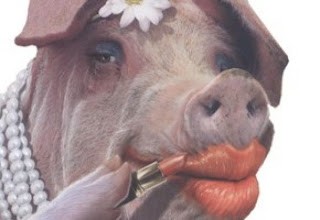 UPDATE 4: And in the annals of
“FuckTheRichAssholeWhoMadeOneGoodCallAssholeThenThinksHeIsSomeKindOf OmnipotentAssholeBeingWhoWillNeverBeWrongAsshole”, we have this report from Bloomie on John Paulson and his mega loss in NadaGold.
ps: tell ya what, this updating lark is more fun than posting separate posts