While flicking through the twittermachine a few minutes ago, trying desperately to avoid writing up a boring part of the Weekly, I came across this report from Raw Story that tells how the US State of Tennessee is bringing back cursive writing lessons for schoolchildren, as from next year. It was a real WTF moment for me so I picked up the camera, found the first of my youngest kid’s schoolbooks I saw, opened a page randomly and took a snap. Here it is: 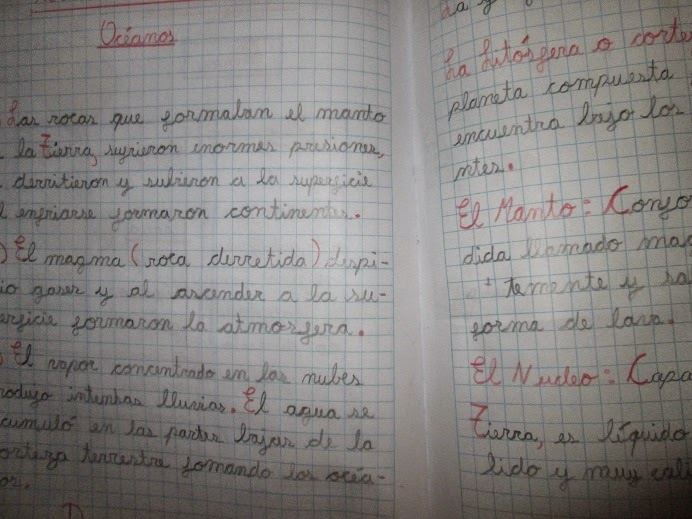 The subject matter isn’t that important, nor is the fact that it’s in Spanish rather than English (if you care enough, it’s part of a project subject she’s been doing about the formation of the earth, what’s in the interior of the planet, how old the earth is, how the oceans formed, etc). My youngest has stacks of books filled with the same kind of writing and what you see up there is the rule, not the exception. And before you ask, yes she knows how to type as well because they teach her that at her school.
She’s seven years old.
That Raw Story article left me dumbfounded. Are you guys up there seriously that stupid? As part of the gotta-give-the-other-side part to the report (another thing: whatever happened to good healthy bias in reporting anyway, you bunch of whussbags?) we get to hear from the education expert personage who says…

“Dedicating teaching time to cursive could take time away from touch-typing, a more important skill these days, she said.”

Could, eh? Why on earth should you replace lessons in handwriting for lessons in touch-typing, hasn’t it occurred to you that both may be useful? But it’s not just that, it’s the way cursive lessons teach wider-ranging and useful fine motor skills, as well as page organization, internal editing, oh man ,the list goes on and on, not to mention the comprehension skills of being able to read other people’s cursive.
Normally you can class me in the place from where the progressives speak (such a butt-ugly moniker, but it’ll do for today) so it’s kind of weird to find myself sticking up for the lawmaking beaks of Tennessee of all places (for one thing, that lesson my girl wrote up on the origins and ages of the planet may cause a few raised eyebrows among the more strident there, but let’s leave that one for another day) but that’s what’s happening here and today. I have my conservative head on, I’m telling you things ain’t what they used to be, I’m getting all fist-wavy about the news (to me) that you idiots up there are handing your abject idiocy to the next generation by not teaching them how to fucking write correctly. Assholes.
So go Tennessee, learn em joined-up and learn ’em good. You’re right, them there yankees and their new-fangled ways need to know it.