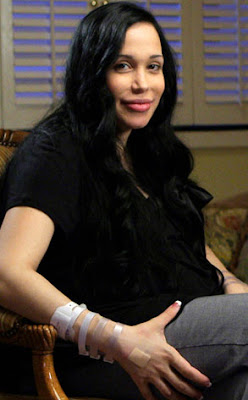 Nadya Suleman, last seen heading for Asuncion
Fernando Lugo, South America’s most fecund head of state, said last weekend that “only God is perfect” in relation to his ever growing paternity issues which is now at three kids and rumoured to be heading to seven. However it’s also noticeable how all the scandal has actually made him more popular in machoman Paraguay where virility seemingly scores more points with the masses than maintaining vows of chastity. This has clearly ticked off the establishment opposition in the still powerful Colorado Party that must have been drooling over a resignation or a coup for a while back there. Now that the good ship Lugo is sailing through the paternity hoo-hah in fine style, frustration is beginnning to show as today ex-President Lino Oviedo called Lugo “indignant and immoral”. He also went on to say:

So by way of a bit of background to Oviedo’s declarations today, let’s try and give you a bit of equal context about Oviedo calling Lugo “immoral and indignant”.

Example one: Madonna is scandalized by the fact that Britney Spears isn’t a virgin.

Example three: Dick Cheney shocked about the way The Hawaiian might fudge an issue or two about foreign policy.

I could go on, but you should have the picture by now.