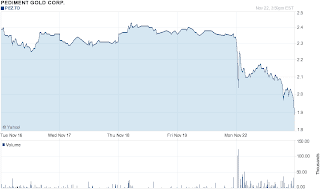 On coming back late evening after a day away from the office, your author notes that the deal between Pediment and Argonaut (AR.to) is in trouble. Here’s an slice of the company NR:

“Amendments have been proposed to the local environmental laws in the State of Baja California Sur (the “BCS”), Mexico which may adversely affect Pediment’s ability to secure a building licence for the development of its San Antonio Project as currently envisioned. The contents and enforceability of the proposed legislation, remain unclear.”

Now that’s a bit too vague for my liking. In fact those “proposed amendments”,  according to this report at least, are laws that have been passed by Baja California’s Congress explicitly banning all open pit mining in the region and all that now needs to happen for these changes to become active law now is for them to be published in the official government Gazette, which is something the members of congress are now pressing for. What’s more, this report has the State Governor, Narciso Agúndez Montaño, saying that the law will indeed be published in the gazette soon and become active. However, the law has been passed back to Congress by the Governor because he wants to see if any amendments will be made first, as he’s heard from families in the San Antonio area who are against the publication of the law.
Let’s be clear here: According to State law, if congress passes a law, the executive must publish it and make it into active law. What may be a delaying tactic from the Governor is holding that publication up, but if congress sticks to its guns open pit mining will be banned, no ifs or buts, in Baja California and the PEZ deal with AR.to would be in serious trouble.
Disclosure: No position in PEZ.to or AR.to.